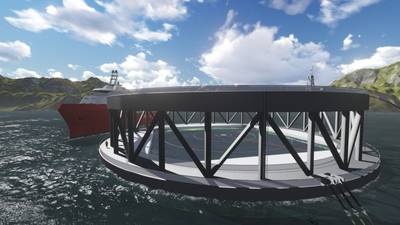 "We are on track to begin output of small salmon in autumn 2020 (and then it takes 1-2 years before harvesting)," Hoestlund said while presenting the company's second-quarter earnings.

Norway Royal Salmon was awarded development licences this year to produce up to 5,990 tonnes of salmon under the Arctic Offshore Farming initiative which involves the use of semi-submersible offshore fish farms built for harsh conditions.

Hoestlund said model testing in France of the Arctic Offshore Farming concept, supported by oil services firm Aker Solutions, had produced very good results and the facility could easily handle 15 meter waves while the requirement is only 6.5 meters.

Norway Royal Salmon's plans target output of 70,000 tonnes of salmon a year, or near double its expected 2018 production.

Q2 Forecast
For the second quarter the company reported operational earnings before interest and taxes of 181 million crowns, short of the 188 million seen in a Reuters poll of analysts.

A harvest volume of 8,773 tonnes topped the 7,100 tonnes expected by analysts however Norway Royal Salmon cut its 2018 salmon harvest guidance by 10 percent to 36,000 tonnes citing disease.

"We have to put this behind us and we are in a good position to grow," Hoestlund said regarding the lowered 2018 outlook.

"With our regular licences, Arctic Offshore and associated companies we have an annual production target of 70,000 tonnes of salmon," he said.

He also predicted a positive price outlook for salmon supported by strong demand and limited supply growth. Prices in the second quarter were the highest recorded for the quarter in the last 20 years at close to 70 crowns per kg.

Norway Royal Salmon share opened down 4 percent after its results but were trading unchanged at 199.6 crowns per share at 1002 GMT.