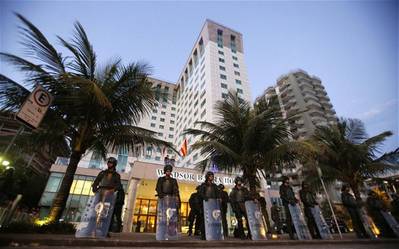 Protestors are rallying against the Brazilian auction of the Libra oilfield site discovered in 2010 roughly 140 miles off the coast of Rio de Janeiro. Multiple Sources reported that some 1,100 troops have already been deployed by the Brazilian government as a preventative measure after protests grew violent last week in Rio.

The auction, which is scheduled to take place this afternoon, dictates that state-run Petrobras would bring in more than 40% of recovered oil from Libra for the Brazilian state. However, 11 other companies are said to be bidding for shares of the field, which according to Brazillian government can potentially  draw 1.4 million barrels per day at its peak.

Many protestors who are not in favor of Libra’s privatization believe Petrobras should be the site’s sole operator. The National Petroleum Agency estimates that the Libra field has recoverable oil reserves of 8-12 billion barrels, and the field is said to contain enough oil to nearly double Brazil’s reserves and bring more than $160 billion in investments over 35 years, the Telegraph said.