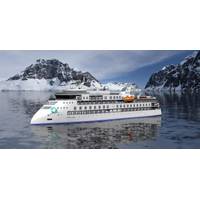 , the Sylvia Earle, scheduled to debut in October 2021.The 126-passenger vessel  named ‘Sylvia Earle’, to honor the renowned marine biologist, oceanographer and explorer.The order comes shortly after the Australia-based company introduced its first new expedition ship in 2019, the Greg Mortimer, named for the Australian mountaineer and Aurora’s founder.The new ship is one of the vessels in owner, SunStone Ships’, INFINITY class. Constructed at CMHI, they have been designed by Ulstein Design & Solutions AS.The ‘Sylvia Earle’ has been designed by Ulstein Design