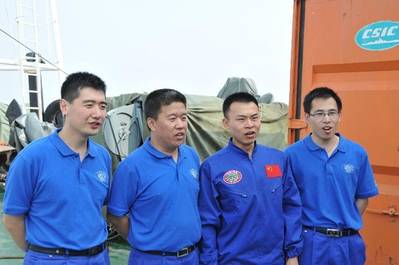 During the 103-day mission, the submersible will submerge for scientific research in the South China Sea, the northeast Pacific Ocean and the west Pacific.

However, Jiaolong is not yet ready for regular operation, according to the State Oceanic Administration (SOA).
The mission will mark the start of a five-year trial period for the Jiaolong before it starts regular operation.

This mission will focus on scientific research, rather than pursuing a greater depth of diving.
For the first time scientists will be on board, with 14 of them qualified for diving. Each submerge will have two aquanauts and one scientist on board.

During the first period of the mission, Jiaolong will conduct experiments on its positioning system, as well as deep-sea ecological and geological surveys in the South China Sea. It will return to Xiamen afterwards.

The second period will see Jiaolong carrying out a number of tasks, including a biological survey, geological sampling and deep-sea photography in the northeast Pacific Ocean.

During the third period, Jiaolong will conduct research on cobalt-rich crusts in the northwest Pacific.