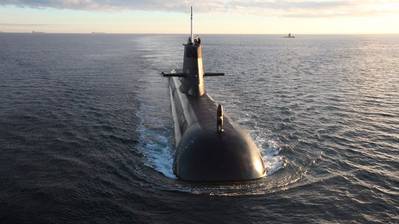 Saab announced it has signed a A$24.2 million (US$18.5 million) contract with ASC for supply of an updated Integrated Ship Control Management and Monitoring System (ISCMMS) for four Royal Australian Navy Collins class submarines.

ISCMMS provides maneuvering and fully integrated ship management of propulsion, trim, power generation and ship services. Deliverables under the contract include updated hardware and spares that addresses obsolescence issues and maintains regional superiority edge for the Australian submarines.
“Saab Australia carried out design, software and hardware development work for the updated ISCMMS during the first stage of the project and this contract acknowledges the success of that work, rolling out the upgrades to the remaining submarines in the fleet. Saab’s design and production work has been carried out in Australia involving over 50 Saab and local subcontractor staff,” said Andy Keough, Managing Director of Saab Australia.
Stage 1 of the project saw the updated ISCMMS software and hardware developed by Saab delivered to ASC, Australia’s Collins Class platform prime contractor. An ASC team integrated the system into HMAS Collins, with HMAS Waller scheduled for later this year.
ASC will integrate the new system into the remaining submarines commencing in 2019, as they complete their maintenance cycles.
“This project demonstrates the high level of local industry content and collaboration in supporting Australia’s sovereign submarine capability, the Collins Class fleet,” says Stuart Whiley, Chief Executive Officer of ASC.
• Australia • ship management • ship services