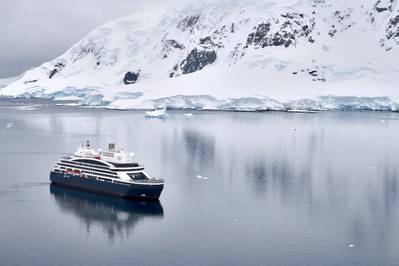 The system is now being used to evaluate the role of global warming and glacial meltwater on the rising level of oxygen in the oceans aboard PONANT’s Le Commandant Charcot, the world’s only luxury icebreaker, a hybrid-electric vessel powered by liquified natural gas.

A unique concept with minimal environmental impact due to her green energy and propulsion systems, Le Commandant Charcot provides a luxurious environment for guests seeking adventure away from the traditional cruise destinations in addition to providing extensive facilities for scientific projects with two research laboratories, one of which is open to the sea.

Installed this Spring by -4H-JENA engineering technicians during a stopover in Cherbourg, France following the vessel's maiden voyage in Antarctica and prior to first voyage to the North Pole, measurement parameters for Le Commandant Charcot’s FerryBox include basics such as temperature, salinity and sound velocity, in addition to measurements that determine the concentration of dissolved oxygen and CO2, which provides insight into bio productivity and the concentration distribution of CO2. The latter is especially important to the study of global warming, ocean acidification and the CO2 absorption function of the oceans.

With her inaugural Arctic voyage starting early in June and a sell-out 2022 season ahead, Le Commandant Charcot’s dual exploration voyage and scientific research approach is paying off. While guests get to reach the geographical North Pole and go kayaking on pristine waters, they can also participate through workshops and seminars hosted by the scientists on board conducting important research, which in addition to projects using FerryBox data, includes the study of ocean plastic pollution and analysis of humpback whale behavior.

“There is relatively little ocean data from the Arctic and Antarctic available, but with FerryBox alongside the laboratory facilities and other scientific sensors and equipment aboard Le Commandant Charcot, we plan to change that,” said PONANT Science Program Coordinator, Mr. Vladislav Sidorenkov-Duprez. “Le Commandant Charcot’s itinerary takes FerryBox further North than the current highest FerryBox installation in Svalbard, allowing us to extend the geographical scope for autonomous water measurements even further using a solution that we can rely on to deliver accurate readings in any conditions.”