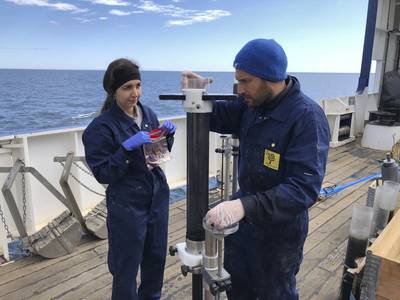 Sediment samples from the bottom of the sea come inside a transparent plastic tube. The scientists are removing the sediments from the tube using a holder to access the sediment at different depths inside the tube (pictured: Mahboubeh Rahmati Abkenar, post doc and Sina Shahabi Ghahfarokhi, Ph.D. student). © Marcelo Ketzer

In a research project titled “Accumulation of metals in Baltic Sea sediment: significance for environmental surveillance and action initiatives,” scientists at Linnaeus University work to map out marine pollution, specifically methane and metals, in the seabed.

The expedition, which takes place on the newly-inaugurated research vessel Svea, is led by Stockholm University and the Geological Survey of Sweden. The route begins in Norrbotten, in the far north of Sweden, and ends in Skåne, in the south, with the group making 14 sampling stops along the way. During the voyage, researchers study water temperature, salinity, oxygen levels, sediment, methane gas, organic material, and other chemical parameters.

Aside from identifying the quantity of hazardous metals, the researchers hope to analyze the amount of methane gas, and how much of that is emitted from the seabed into the water and air, thereby increasing the level of greenhouse gases in the atmosphere. “Thanks to new equipment that we were granted major project funding for last summer, it is now possible for us at Linnaeus University, for the first time, to carry out the type of measurements needed to be able to analyse and map out the occurrence of methane gas in sediment and water,” said Marcelo Ketzer, environmental science professor at the University.

Ketzer included that the expedition will provide new opportunities to understand climate change in the ocean caused by greenhouses gases. Additional implications involve identifying metal pollution in fish and marine animals, some of which are consumed by humans.

Arctic Warming Cascades Through Ocean and Over Land

The Arctic region has had its second-warmest year since 1900, continuing a pattern of extreme heat, ice melt and environmental…