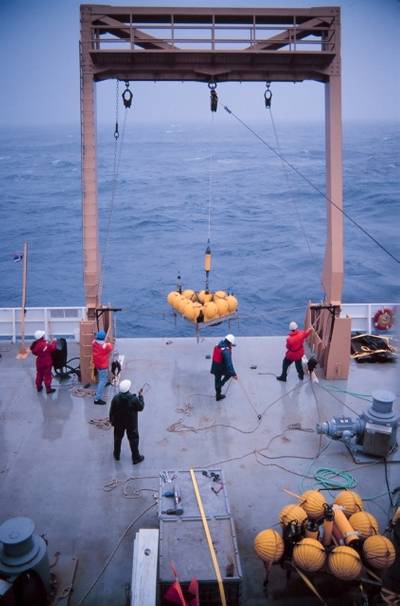 In 1995, NOAA began construction of the Ronald H. Brown, which is currently the largest in the agency’s fleet. Following its launch in 1997, this oceanographic and atmospheric research vessel has traveled from its Charleston, SC, home port to the Atlantic, Pacific and Indian Oceans. At a length of 274 feet, Ronald H. Brown can displace more than 3,200 tons and is outfitted with a suite of instruments for collecting and assessing scientific data above and below the ocean surface. This allows NOAA’s office of Marine and Aviation Operations to simultaneously measure the atmosphere and the ocean and increase its understanding of global climatic changes and other environmental issues. Onboard instruments include a system to measure carbon dioxide levels in the air and surface waters; Doppler radar; echosounders and a multi-beam sonar system to collect information about both the water column and the seafloor, among others. Through its groups of cranes and winches, the Brown can also support heavy scientific equipment such as submersibles and surface floats.
Marine Technology Reporter has been commissioned to publish the Official “Oceanology International 50th Anniversary Edition” which will distribute with the MARCH 2020 edition of MTR. For information on advertising in this edition, contact Rob Howard @ howard@marinelink.com, t: +1 561-732-4368; or Mike Kozlowski @ kozlowski@marinelink.com, +1-561-733-2477.
• Atlantic Ocean • Indian Ocean • Mike Kozlowski
Email