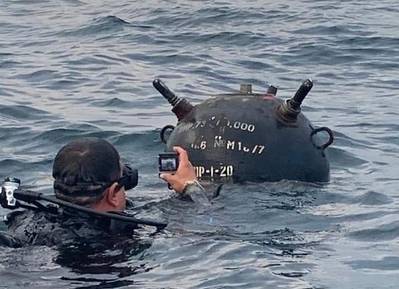 Romania's military carried out late on Sunday a controlled explosion of a naval mine that had drifted close to the country's Black Sea shore, the defense ministry said.

Mines began floating in the Black Sea after Russia invaded Ukraine on Feb. 24, and Romanian, Bulgarian and Turkish military diving teams have been defusing those drifting in their waters.

Russia and Ukraine accuse each other of planting them.

The Black Sea is crucial for shipment of grain, oil and oil products. Its waters are shared by Bulgaria, Romania, Georgia and Turkey, as well as Ukraine and Russia.

Romania's defense ministry said the mine defused on Sunday, the second handled by the Romanian military since March, was drifting some 2 nautical miles off the Romanian shore. Read full story

A new Romanian Black Sea offshore gas platform that began operating in June had to launch without insurance as it is unavailable because of the risks posed by war in Ukraine, including mines detected in waters nearby.