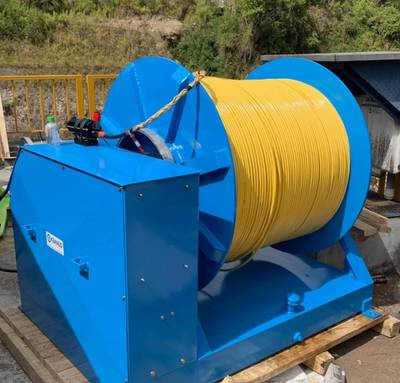 Seamor Marine introduced a new remotely operated vehicle (ROV) with a 3-km capacity, expanding the reach of Seamor’s previous systems by one kilometer. A unit recently arrived in western Panama where one of the country’s hydroelectric generation companies has begun using it for tunnel inspections of two hydroelectric projects on the Old Chiriqui River.

“We are excited to bring this new innovation to the pipeline industry,” said Robin Li, President of Seamor Marine. “The ROV 3-kilometer fiber optic tether and reel system expands the range of our vehicles from two kilometers to three kilometers, allowing our clients to perform long-distance inspections more cost-efficiently and with less of an environmental impact.”

“One of the main reasons we chose an ROV to inspect the tunnels was that it was much less costly both financially and environmentally than the alternative of draining the tunnels for inspection,” said Iván Parra, Civil Engineer at EISA. “The operation will now be completed with a very small environmental footprint using Seamor technology.”

The inspections required a deep-water ROV, which is why SEAMOR paired the 3-kilometer fiber optics tether with its Chinook ROV. Able to dive to 600 meters (2,000 feet), the Chinook ROV is equipped with a sensor skid carrying two Imagenex sonars: the 965A digital multi-beam imaging sonar and the DT360 multi-beam profiling sonar. These sonars are operated simultaneously using an Ethernet switch to the fiber optic tether multiplexer, allowing the EISA team to navigate and inspect tunnel walls in almost zero-visibility conditions. Auto depth and auto heading functions help them safely navigate the tunnel.

One of SEAMOR’s partners in Finland consulted with the EISA team onsite to operate the ROV system in long tunnels. Early testing was successfully carried out with a large excess of power available in reserve.

Once the tunnel inspection is complete, the EISA team plans to use the Chinook ROV for other tasks. Seamor’s ROV systems have been designed with a modular platform that allows users to swap accessories or upgrade their ROV with new features after purchase.