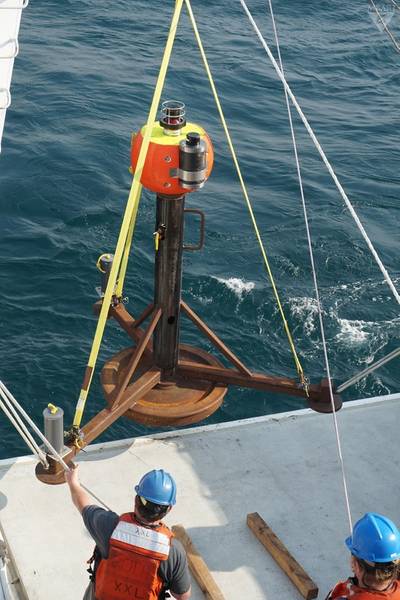 Researchers have deployed high-tech robotic sensors disguised as boulders for the first time to measure the initiation and evolution of the huge, hard-to-measure seafloor avalanches that regularly damage global networks of seafloor telecommunication cables.

The so-called "smart boulders" revealed some surprising findings that will help inform where best to lay the seafloor cables that keep the internet running. Published this week in the journal Nature Communications, this research shows that submarine avalanches of rock and sand, which have been notoriously difficult to directly measure due to their powerful nature, can travel across the seafloor at almost 30 km/hour (similar to a human sprinter), and are powerful enough to move objects weighing almost one metric ton for several kilometers.

Over the course of this multi-year project -- the most ambitious attempt yet to measure these avalanches -- a total of 15 events were successfully tracked, some of which traveled for over 50 kilometers into the deep sea.

More than 50 instruments were installed on and above the seabed within Monterey Canyon offshore California, including the novel smart boulders designed to travel within the avalanches and measure their speed and movement. One of these smart boulders was also attached to a heavy 800 kilogram frame that was carried several kilometers down the canyon within a slurry of sand and rock fragments. The presence of such a dense sediment-rich layer at the base of the avalanche came as a surprise, and challenges many existing theories about how these flows behave. Repeated seafloor surveys made by robotic submarines revealed that the zone of seafloor affected by this powerful and dense layer was only limited to a thin central part of the submarine canyon. As flows traveled further to deeper water where the canyon was wider, they were also found to slow down. These new findings provide valuable information to identify safe crossing points across other canyons for new seafloor cables and pipelines.

According to National Oceanography Center (NOC) scientist Dr. Mike Clare, one of the authors of this paper, “The dense nature of the submarine flows came as a surprise. It means they could cause more damage to communication cables than we thought. It will also make them harder to image.”

The 18-month, international, collaborative investigation also revealed that that these powerful avalanches do not necessarily need a big event to trigger them.

“If you think about snow avalanches, you can trigger one with a stick of dynamite dropped from a helicopter. On the other hand, if the conditions on the slope are just right, even a handclap up the valley could trigger one.” Dr. Clare said. “Our research shows that submarine sediment avalanches are the same…they do not necessarily need a big trigger if the conditions are right.

The new study forms part of the NOC’s research portfolio that aims to help protect people and property from marine hazards; it was funded by the David and Lucile Packard Foundation, and the Natural Environment Research Council (NERC). Dr. Clare was supported by the NERC “Environmental Risks to Infrastructure” Innovation Program, which aims to better understand how natural hazards impact infrastructure and society. The field program was led by Monterey Bay Aquarium Research Institute, supported by United States Geological Survey, Ocean University of China, Quindao National Laboratory for Marine Science and Technology, Durham University, Hull University, University of Southampton and National Oceanography Center.

U.S. Secretary of Commerce Wilbur Ross announced the allocation of $88 million in fishery disaster funding to Alabama, Louisiana and Mississippi…