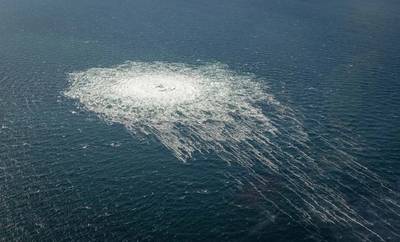 The gas leak at Nord Stream 2 seen from the Danish F-16 interceptor on Bornholm in late September 2022. Photo: Danish Defence

Nord Stream AG, the operator of the ruptured Nord Stream 1 gas pipeline, has been granted permission to survey an area in Danish waters, the Danish Geodata Agency told Reuters on Thursday.

The operator has already sent a chartered ship to waters off the coast of Sweden to inspect the damage on the pipeline, which carries gas from Russia to Germany through the Baltic Sea.

Sweden and Denmark have both concluded that four leaks on the Nord Stream 1 and 2 pipelines were caused by explosions, but have not said who might be responsible. World leaders have called it an act of sabotage.

The application, sent to the Danish Geodata Agency on Oct. 13, was given the green light on Nov. 1, an agency spokesperson said. It gives Nord Stream AG permission to survey depths in Denmark's exclusive economic zone.

A Nord Stream AG representative was not immediately available for comment. Initial data from the operator's own investigations in Swedish waters found "technogenic craters," meaning man-made, with a depth of 3-5 meters.

Wales’ national marine test center, META, said Thursday it has upgraded its Marine License, so it can now accommodate more…