A growing battalion of small, compact systems is marching in on the subsea world, in some ways making it a bigger space for more to enter. Elaine Maslin reports.

Smaller remotely operated vehicles (ROVs) and smaller autonomous underwater vehicles (AUVs) are growing in number and in turn driving smaller technologies that support them. The result is a few new kids on the block and what you could call a rising march of miniaturization.

They span from vehicle manufacturers to acoustic and optical sensor system makers. A number of these attended a demonstration event focused on unmanned systems in the offshore space, held by Norway’s Equinor, in Tau, near Stavanger, in October 2019.

NotiloPlus
Starting with the vehicle manufacturers, one was NotiloPlus, a French start-up, founded in 2016, that’s producing a small but smart ROV.

The Seasam weighs in at 9kg and is the missing link between a small and compact but piloted ROV and bigger ROVs packed with kit that cost a lot. Nicolas Gambini, the Marseille-based company’s co-founder and CEO, says NotiloPlus is enabling a small vehicle with a lot of smarts through computing power. “Machine learning and software allows you to do positioning and sensing,” he says. “For positioning, you need to use lots of hardware, but we wanted this to be as cheap as possible. So, for less than the price of one high-end positioning sensor we have a system that uses cheaper sensors but then fuses them and uses algorithms to magnify the data so that it’s close to most perfect sensors.

“This means [with the Seasam] we can use simple acoustic sensors for positioning and a camera for computer vision. The computer vision means that in the frame of what the drone sees it can identify a point of interest and touch it, if that’s what’s needed.” The vehicle can either be tethered, if you want live feedback, and untethered. “Also, it can provide fully autonomous diver following or dam or ship hull inspection. For a small ship, say 10m long, it doesn’t even need a map, it can by itself identify a rudder etc. For a long hull, you can tell it the shape and length and then it choses its own pattern for an inspection.”

The firm, which does its testing in Lyon, has been shipping Seasam systems since March this year and 300 are now “out there”, from France to Korea, working in the leisure market, eg. diver centres, as well as industrial, inspecting infrastructure, and science. Gambini says it can carry other pay load or tools and can be adapted. The firm also has a partnership with TechnipFMC, which including working on things like industrial production of the drone how provide a global offering. Looking into the future, Gambini says interconnected drones are likely where the industry will go.

Birdview
Not all subsea operations have to be done by subsea vehicles. Another start-up, Birdview, is designing an aerial drone that can drop sensors into the water to gather data – or whatever you might want a subsea sensor to do. The Oslo-based company has already been working with Norway’s Institute of Marine Research (IMR) in Bergen to provide a remote sensor for offshore fisheries – i.e. a drone that is launched from a fishing vessel and dips a sonar into the water to see if there are shoals of fish, which can then inform the vessel where it should go.

Mohibb Malik, a Project engineer at Birdview, says the company has been using commercially available aerial drones, but is now developing its own modular system. “The drones available today are great for land based flight, but not for offshore marine environments,” says Malik. “We’re making a design that’s watertight and can float (in case of a ditching).” Where flights it’s been doing currently are at about 15-20 minutes, the target for its own drone is three hours – within a 50km range in order to maintain control/communication with it. 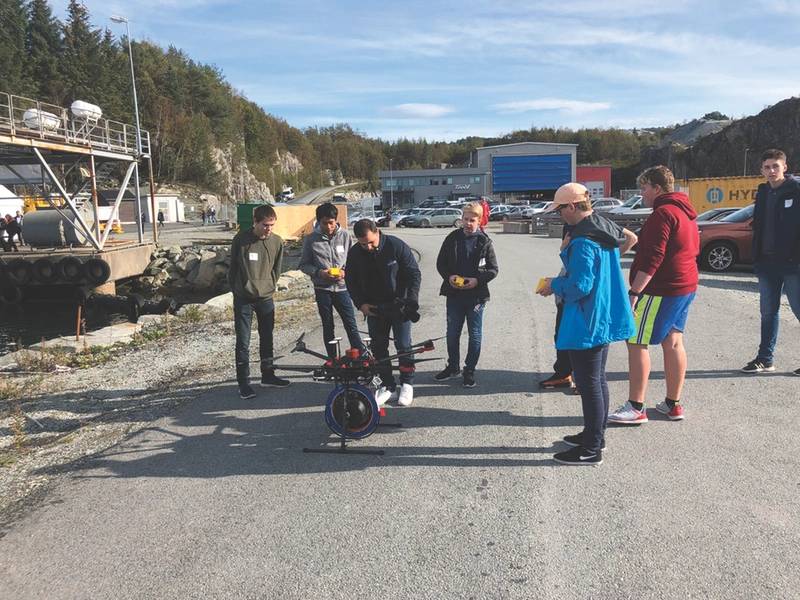 While the company was founded in 2014, it’s only been really active for about a year, says Malik, mostly focused towards the fishing sector. This has involved using a DJ1 6-blade drone that it’s been launched from the IMR’s fishing vessels offshore, learning and honing take-off and landing. Here, it’s been using a Simrad echo sounder, that’s dropped into the water on a small winch from the drone, to find fish. The echo sounder gathers data that’s then processed to show where fish are.  And the results have been good, says Malik, avoiding issues fishing vessels can have with vessel noise in the water because it’s able to dip the sonar further away from the vessel. The next step is edge analytics – i.e. data processing on the drone so fisherman know faster where fish are.

But, Birdview see other opportunities, including dipping a modem to gather data from underwater sensors or even to provide a communications link to remote control ROVs or mobile underwater platforms, so they don’t have to stay within range of a communications hub.

It’s now working on a system with a 50km single range with semi and fully automated missions. A challenge is data transfer – when away from the host vessel or communications networks, less data can be sent, so the drone’s communications systems have to be able to reduce the amount of telemetry, but still have the bandwidth to receive new missions, without direct control.

The firm aims to start testing its home-grown drone in about a year and take it to market in about 18 months to two years. Birdview is also working with TechnipFMC.

Water Linked
These systems need sensors and new kid on the block is offering some of those. Over the past seven years, Water Linked, based in Trondheim, Norway, has developed ultra-small subsea positioning and underwater modems. The subsea positioning system is based on an inverted short baseline system, using four receivers and a locator on a mobile object, such as a vehicle. It’s been integrated with Blue Robotics mini ROVs since 2017.

It’s small because Water Linked’s focus has been on the computing that can number crunch lower power (i.e. smaller) sensors to come up with the same results are bigger (i.e. more costly) sensors. The company has also designed its own transducers and, to remain lean, it outsources manufacturing within Norway.

“We are doing number crunching to increase the chance of out-putting a correct position,” says Oliver Skisland, CEO at Water Linked. “It’s not taking the first and easiest answer as the truth, it’s doing a lot of computing to increase the possibility of giving a correct position.” Water Linked is doing this using high-performance field programmable gate arrays (FPGAs). “FPGAs are a fantastic tool because you can programme them to be optimized for a specific task, compared with a generic PC,” explains Skisland. “We’re using ultra-modern technology to create small, power-efficient and cost-effective products. We take a very integrated approach where even the tiniest components are discussed in detail before it is allowed onto our boards.” 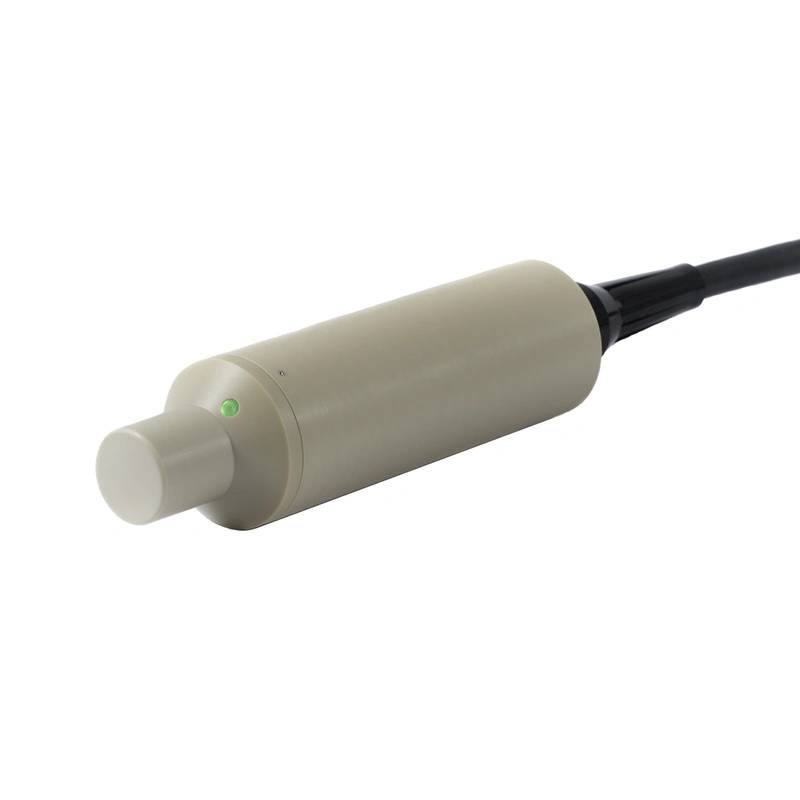 Power is a trade-off. Water Linked’s positioning system works out to 100m, with an extension to 200m coming in 2020. Its modems work out to 1km, says Skisland. Further would mean more power, which would mean bigger vehicles. But, this is the optimum for the market the firm is targeting – mini ROVs. More and more people are using mini ROVs because they’ve become cheap enough. With sensors on them, they can do more with them such as advanced navigation and providing documentation (position data) for survey or inspection work or accurately position divers, says Skisland. So, just like NotiloPlus, Water Linked says it can offer a whole system for the same price as a single sensor. “We’re opening a new market, giving mini-ROVs new tool to do advanced navigation that’s not been done before,” says Skisland.

Next on the company’s hit list is a super small Doppler velocity log (DVL) to help small ROVs or AUVs hold position for inspection or intervention work. It’s due to be launched early 2020. Depth rated to 300m, it is set to have a minimum altitude of 0.15 m, 50 m maximum altitude from its 25mm high and 55mm diminutive form factor.

Hydromea
Providing a communications link between vehicles or assets is another new kid on the block – Hydromea. The firm’s founders, Felix Schill (CTO) and Alexander Bahr (COO), had started out designing a swarm of miniature AUVs back in 2003. After going their separate ways – one to do a PhD at MIT in underwater navigation and the other one to do a PhD in underwater mesh network communication at the Australian National University in Canberra, Australia, they came together at the Ecole Polytechnique Fédérale de Lausanne (EPFL) in Switzerland where they started working together again on miniature AUVs.

But, while trying to build them, they realized that they couldn’t find small enough thrusters, batteries for endurance, and small acoustic modems. In addition, they were asked by Germany’s Alfred Wegener Institute (AWI) to expand their work on optical communication and develop a stand-alone unit. Their LUMA 500ER now offers 500kbs (thousand bits per second) data rate at up to 70m range over a 120 degree cone, says Igor Martin, the firm’s CEO. But he says they think that can be expanded to multi megabits per second at greater distances.

“Now we see that as you miniaturize stuff, it becomes more affordable,” says Martin. “It gives you the flexibility to retrofit. It’s portable and scalable. Instead of costing tens of thousands, it’s thousands and it opens up different opportunities. With small portable systems from companies like Water Linked and Hydromea, you enable an environment where having inexpensive modems or tools or sensor-systems - allows you to scale up.”

The firm has been on the Oil & Gas Technology Centre’s TechX accelerator program and has seen its optical communication technology used by Rever Offshore, Ocean Installer and i-Tech 7 for tasks like transmitting roll/pitch/yaw data from gyro boxes to observing ROVs during subsea construction projects to give on-deck crane operators, for example, faster information about what’s happening subsea. 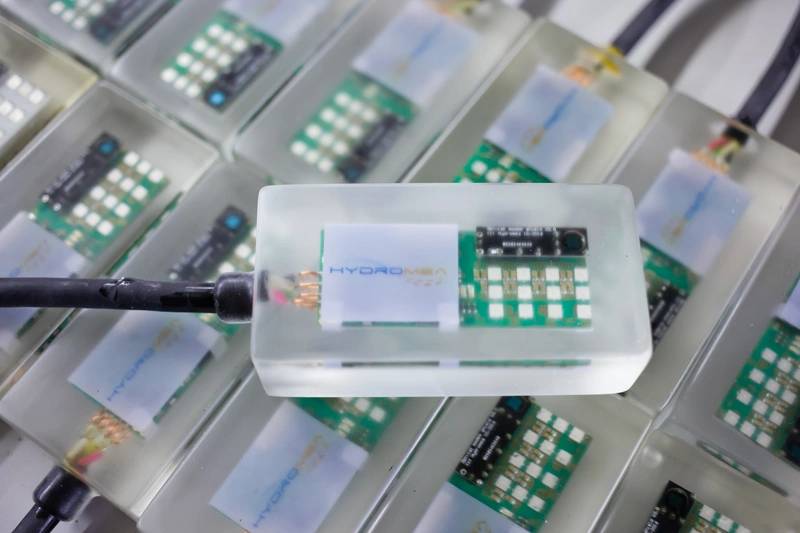 A LUMA modem was deployed by Rever Offshore at a wellhead site as part of an Ashtead Technology Autonomous Monitoring System (AMS+) during a drilling project for Total in the North Sea early in 2019. An ROV could then get data from the AMS+, using LUMA, 8m from the wellhead.

Later in 2019, an Alfred Wegener Institute and Max Planck Institute for Marine Microbiology scientific cruise on the research vessel Sonne used LUMA modems on Geomar’s ROV KIEL6000 to directly communicate with subsea instruments, also with LUMA modems, in 4,000m water depth, to ensure that their sensors were working and reconfigure them if necessary.

With the technologies it’s built over the last 10 years, including LUMA, Hydromea is now turning its attention to building a miniature, tether-less semi-autonomous underwater drone, called the ExRay. It’s being designed to be able to operate inside confined spaces filled with water, such as ballast water tanks on vessels. The goal is for it to be able to use simultaneous localization and mapping (SLAM) to navigate tanks and to use mosaicing software to produce 3D heat maps of areas needing maintenance. The first ExRay is due to launch in 2021.