While much focus on resident subsea vehicles has been about the vehicles, there’s also been a lot of focus behind the scenes on creating electric tooling. The industry has relied on hydraulic tooling since tooling has been used, with the benefits and drawbacks that come with it. Leading the field has been Schilling Robotics, now a part of the TechnipFMC group. But, for electric vehicles to really make to most of being all-electric, they really need to be free of the burdens of hydraulic systems. Suppliers are coming up with solutions.

It has an advanced intelligent control system, combined with a perception system, makes it possible to deliver supervised automatic manipulation. This includes end point control, collision prediction, detection and prevention.

“Greater manipulator control has come from designing a system with braked, electric rotary joints and an intelligent, distributed, control architecture offering position and power feedback,” says Bates. “The result is a manipulator with the capability of existing hydraulic work class manipulators that is more precise, more dexterous and more capable of adopting advanced AI control techniques.

Bates says the development is well advanced with testing all the core joints and building blocks. A first prototype arm will be tested in March, with a first deployment mid-year and then first production deliveries expected end of the year.

While the manipulator will be generally available to the market, a pair will be installed as standard on Saab Seaeye’s new electric work class vehicle. More on that another time. 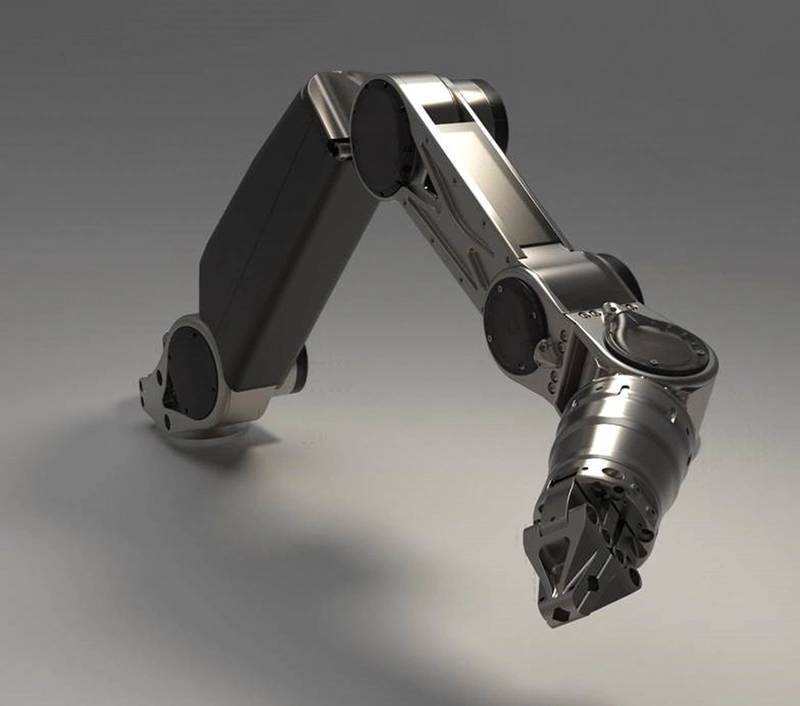 Core to the project is developing motion control software that will enable the use of a Titan 4 control joystick. Another Norwegian firm, IKM Technology, is a partner on the project.

Nedrehagen told OE at Tau, “It is a conservative market,” with an ‘if it’s not broken, don’t fix it’ attitude and contracting models that inhibit new technology adoption.” But, change is happening and he’s keen to see an industry standard interface for subsea tooling so that it’s easier for alternative suppliers to provide equipment.

A new concept
Oceaneering has developed a completely new concept for its Freedom vehicle. It has designed a tooling interface that can either work inline of the vehicle, e.g. facing forward, or pointing down, by rotating it 90 degrees. The neat thing, Torleif Carlsen, research and design engineer, Oceaneering, told OE at the Tau event, is that all the “smarts” for operating the tooling, including the motors, are on the vehicle so that the interchangeable tools (suites of which can be kept, ready to use, subsea) can be as simple and robust as possible.

“It’s a mechanical interface with all the smarts inside the AUV [autonomous underwater vehcle],” he says. These “smarts” are comprised of two motors, each independently controllable, that can drive multiple functions within the individual tools, including a gripper, cleaning brush, CP probe, and softline cutter in one with an output of up to 2700nm. It’s not just handy for tooling; when docking, one motor drives a locking mechanism to hold the vehicle onto its docking system. The innovative interface also provides pinless power and communications connectivity.

“When we looked at this approach, we saw we could do much more,” says Carlsen. “We can even put a propeller on (to the interface), for long range operations. This is just the tip of the iceberg.” Another idea is to use it to fly out a small drone from this interface on Freedom, when perhaps an alternative viewing angle is needed. Furthermore, because it’s electric, when applying torque, it’s able to sense the rotational torque being applied (something that isn’t measured with existing hydraulic driven systems).

While designed for the Freedom, the idea is for the interface to be compatible with the entire Oceaneering fleet of ROVs, says Carlsen. This roll out will include a handheld version of the interface for traditional work class ROVs and enable the entire fleet to make use of the subsea tooling suite. 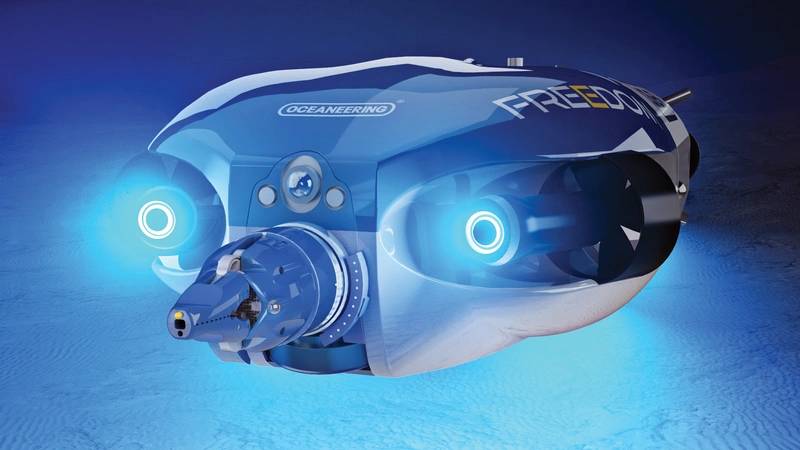