The July/August edition of Marine Technology Reporter, the 15th Annual "MTR100", recognizes Dr. Cleopatra Doumbia-Henry, president of the World Maritime University (WMU) in Sweden, as a leading "Ocean Influencer." She is a leader on issues impacting the international shipping industry, maritime law and gender equality in ocean-related fields. She is a distinguished academic in the field of international law, justice drives her motivation for social and environmental change on a global scale.

Born and raised in the Commonwealth of Dominica, Doumbia-Henry grew up surrounded by maritime culture, where the Caribbean Sea and the shipping industry have a large impact on the economy and daily life. Her professional interests and successes can be credited to both her island upbringing and paternal guidance and support. Cited as a source of inspiration, Doumbia-Henry’s father was a farmer, educator, and politician, teaching at a local school and serving as both a member of Parliament and in various ministerial positions. After her mother’s death during her teen years, her father single-handily supported the family while raising nine children.

Soon after, Doumbia-Henry left home to attend the Cave Hill Campus of the University of West Indies in Barbados, where she graduated with an upper second-class degree in law. She later completed a master’s in law and earned the opportunity to pursue a PhD in international law at the Graduate Institute of International Studies and the University of Geneva.

Her research examined the law-making role played by international organizations, such as the International Maritime Organization (IMO), and their influence on the law and practice of states and industry: “I was fascinated by the way technical international instruments adopted by IMO had an incredible impact due to the global nature of shipping and the need for uniform standards required to enable shipping to be safe, secure and protect the marine environment.” 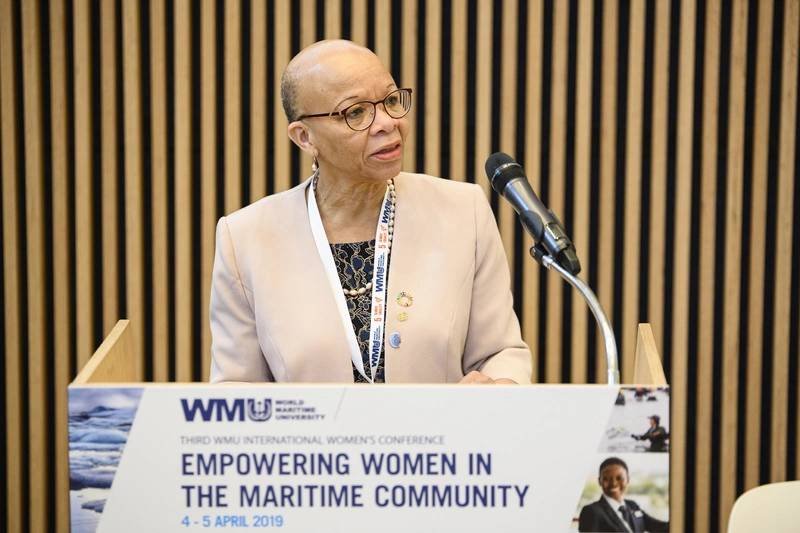 President Doumbia-Henry speaking at the WMU Empowering Women in the Maritime Community Conference - April 2019 © Leo ErdfeltIn 2015, Doumbia-Henry became the president of WMU, an institution that educates future leaders in the maritime and ocean sectors and conducts research in crucial fields. Operating within the framework of the university and furthering sustainable ocean management is the recently inaugurated WMU-Sasakawa Global Ocean Institute. Formally introduced in May 2018, the Institute “acts as an international focal point where policy makers, the scientific community, regulators, industry actors, academics and representatives of civil society meet to discuss how best to manage and use ocean spaces and their resources for the sustainable development of present and future generations,” said Doumbia-Henry.

Furthermore, the Institute is making unique contributions to human rights and ocean activities with a focus on the needs of developing countries, plus promoting gender equality and empowering women and all girls in ocean-related fields. “To address the challenges faced by the ocean today, we must mobilize all the qualified human resources around the world. During the 37 years of its existence, WMU has educated more than 1,100 female graduates who are working in various government agencies and institutions, some of them holding very senior positions, which is an important indicator of such progress,” she added. As such, WMU is partnering with Fisheries and Oceans Canada to deliver a project titled, “Empowering Women of the UN Decade of Ocean Science for Sustainable Development.” Additional activities, all which incorporate evidence-driven and interdisciplinary research, features issues such as: marine debris, Sargassum, and marine spatial planning in the eastern Caribbean; a land-to-ocean PhD program for candidates from developing countries; and automation and robotics for ship survey purposes under the European Union’s H2020 program.

From her prominent position and with years of maritime industry legal work, Doumbia-Henry is aware of the problems threatening the future of the world’s oceans. The biggest risks, she said, were those linked to unsustainable anthropogenic activities, such as “the impacts of human-induced climate change, ocean acidification, land-based sources of marine pollution, the loss of marine biodiversity in the deep ocean, unsustainable fisheries and illegal, unregulated and unreported fishing,” to name a few. These issues, among many others, will have human and economic costs that will be felt disproportionately more in the developing world. Global security is also threatened by the possibility of unilateral action by countries in relation to ocean and maritime regulations. “There’s the pervasive threat of the failure of multilateralism and respect for diversity, along with the resurgence of national interests taking precedence over community interests within the international legal order,” Doumbia-Henry said. The COVID-19 pandemic also remains at the forefront of challenges to a successful maritime future. Doumbia-Henry sees the virus as a chance to highlight the importance of developing and implementing science-based policy and regulations. At the same time, the pandemic has emphasized the “need of developing countries to have their own scientific capacity to plan and implement mitigation measures, including circular economics that aren’t dependent on global supply chains.” 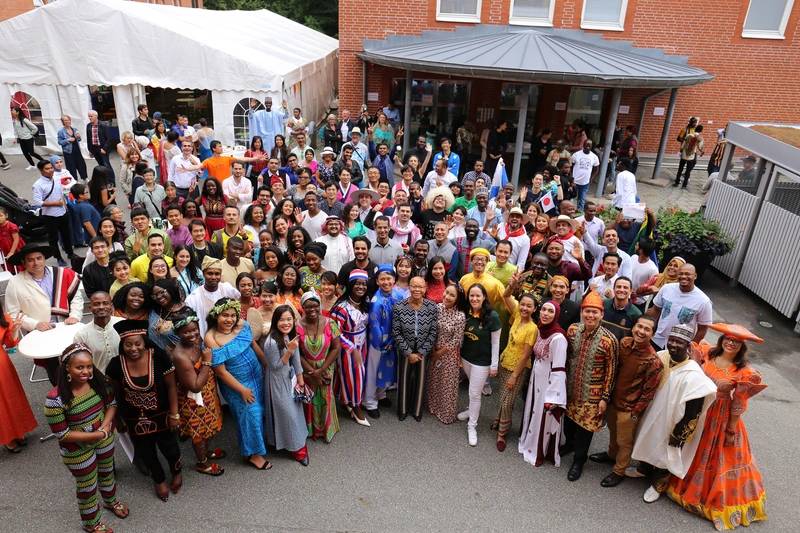 President Doumbia-Henry with students and staff at WMU International Day 2019 © WMUAnother noticeable repercussion for all countries has been the plight of seafarers working on board merchant and cruise ships. “On June 29th, over 400,000 seafarers were still stranded, with 200,000 needing to leave ships and a similar number needing to replace them. They have been experiencing a growing humanitarian crisis since they haven’t been able to transit and transfer through ports and airports that would enable them to return home following the end of their contracts,” said Doumbia-Henry.The impending maritime threats are well recognized, though, and Doumbia-Henry shared much that has been done recently on the legal front to create awareness and incite action.

Notable international processes that maintain the same impact include biodiversity plans beyond national jurisdiction at the Intergovernmental Conference, the implementation of ocean-related goals in the 2030 Agenda for Sustainable Development, the UN Global Compact, the IMO Strategic Plan 2018-2023, and the “Our Ocean, Our Future: Call for Action” document adopted by the UN Ocean Conference in 2017. And crucially, Doumbia-Henry pointed out, there are changes beyond the maritime industry. In 2017 the UN proclaimed the decade of 2021-2030 a “Decade of Ocean Science for Sustainable Development,” providing a unique opportunity to “create a new foundation, across the science-policy interface, to strengthen the management of our oceans and coasts for the benefit of humanity.” She added, “We’re also seeing the incorporation of ocean-related options into Nationally Determined Contributions (NDCs) under the Paris Agreement, as well as greater convergence between ocean and climate change regulatory regimes.”

A member of the maritime community since birth, Doumbia-Henry is intimately familiar with ocean-based practices, marine laws and regulation, and sustainability actions. Her role at WMU is a crucial one, as the coming years may prove to be some of the most important for our planet’s future. Doumbia-Henry’s impressive legal career, undeniable knowledge, and passion for social and environmental justice will all become ever more significant in the fight to protect our oceans.