Unmanned platforms and underwater vehicles have been providing new ways for ocean scientists to study the ocean in more detail and over longer periods. What happens if one can deploy the other?

The advantages of unmanned systems deploying others are multiple, not least in our expansive oceans. Deploying a glider (down to 1,000m) using a wave-propelled unmanned surface vessel (USV) means data can be gathered together over long periods at far flung locations without the need for a crewed research vessel to deploy either system, which can be hard to get slots on, let alone funding.

But then, what if you also want to try deploying such a system in high latitudes; the Antarctic, for example? The Universities of East Anglia (UEA) and Exeter (UoE) and wave-propelled USV maker AutoNaut, and other academic partners, have successfully tackled the first challenge and now they’re working on the second, through a number of related projects.

“This sort of technology offers a lot of opportunities for us,” says Karen Heywood, who leads the glider programme at the University of East Anglia (UEA), and who came up with the idea. “It means we can deploy gliders or other vehicles in the middle of the ocean without having to send a ship there. We can be more efficient. We can choose when to deploy it,” she told the Marine and Autonomous Technology Showcase (MATS) conference last year. “AutoNaut can sit and wait for a Tsunami, an eruption or spring bloom and can also deploy into places too dangerous to go for a manned vessel. And they can get simultaneous measurements. In Antarctica that’s very important.”

Gliders, being buoyancy driven so using little power, are long-endurance vehicles so they’re great for gathering ocean data. But because they don’t travel very fast (average 1 knot), getting to a site of interest can take a long time and once there they’re work is beneath the waves, so they can’t also gather meteorology data, says Heywood. They’re also hard to deploy from inshore, because they need a certain amount of depth to be able to move forward in their seesaw motion. The AutoNaut can travel faster (up to 3 knots) to an area of interest to deploy a SeaGlider, gather surface data and provide a GPS location. 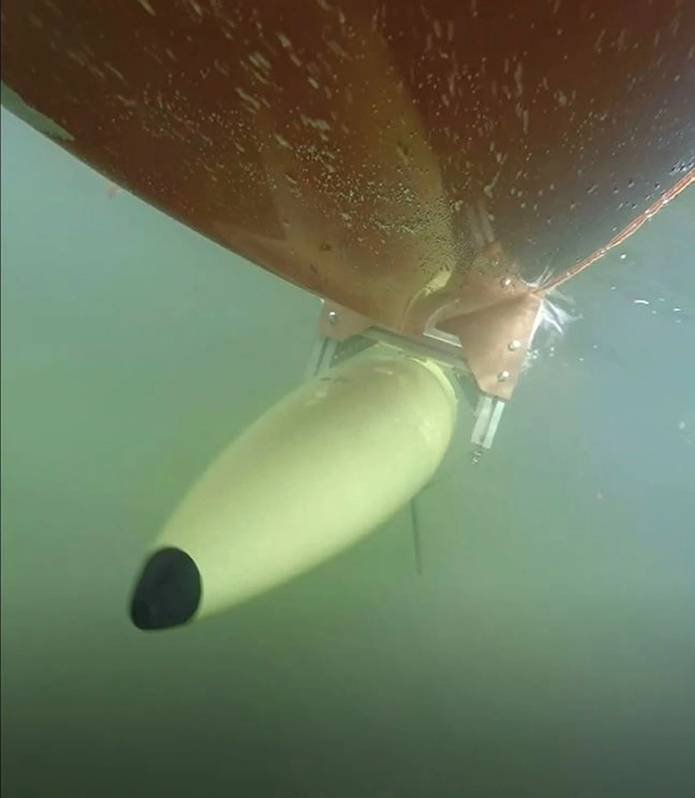 Attaching a SeaGlider to the AutoNaut was a mechanical challenge led by Alastair Nichol, lead mechanical engineer at AutoNaut. It had to be as fool proof as possible, robust and able to cope with biofouling, he says. Ideas such as carrying SeaGlider on top of the AutoNaut and or towing it were set aside. Instead, a way to carry it underneath, mid-aft, in order not to interfere with the AutoNaut’s wave propelled propulsion (which relies on the bow moving up and down to an extent), with a release mechanism that could be triggered by a remote pilot, over satellite, was designed.

The result is a circular, stainless steel hinged clamp which is loosened, via a linear actuator, which releases a spring, which pushes a rod (the only part that penetrates the hull), opening the clamp enough to allow the SeaGlider out. The SeaGlider’s tail fin slots into a gap in the AutoNaut’s stern cone, preventing it moving during transit. As this is where the AutoNaut’s single rudder normally goes, a new rudder arrangement had to be designed. Then, to stop the SeaGlider dropping out haphazardly when it’s released, potentially damaging its sensors, its nose is guided by a track along the bottom of the AutoNaut as it slides out until it’s clear enough to allow more movement.

Earlier this year, the design was put to the test. An AutoNaut USV called Caravela, which had been modified to be able to carry and then deploy a Hydroid SeaGlider, “Humpback”, was deployed from the coast of Barbados as part of the multi-platform EUREC⁴A project. Caravela sailed out to sea and then deployed Humpback, staying out for 35 days, before heading back to shore, with the SeaGlider later recovered by a vessel.

Following the successful deployment of Caravella and Humpback off Barbados, the focus is now on deploying this system in high latitudes, in areas including the Roaring Forties and Furious Fifties, which poses a whole new set of challenges, from icing or hitting ice to harvesting enough energy to continue to power onboard instruments when it’s too dark for solar panels. Operations in high latitudes would help fill the dearth of data from the Southern Ocean and Arctic, especially in winter.

For this project, AutoNaut is working with UEA and UoE under an Innovate UK funded AutoNaut for extreme environments project. There’s been focus on ruggedization, anti-icing, ice-detection and avoidance, biofouling and energy harvesting, says Phil Johnston, business development manager at AutoNaut. That’s included hydrophobic coating testing at the Roland von Glasgow air-sea-ice chamber at UEA and tests by Plymouth Marine Laboratory using three forward looking sonars and a deck mounted thermal camera. The UoE has also developed a pendulum motion energy harvester and Nichol has been redesigning the AutoNaut’s wave propulsion system to transfer the energy from its foils more efficiently – trials of which have already proven positive, he says.

One intriguing result of the testing has been that with a thin layer of ice, AutoNaut’s solar panels actually see an increase in efficiency, before it deteriorates as the ice thickens. The team has also learned that metal inserts – used all over the USV to hold panels on, etc – work their way out under icy conditions, so needed changing, says Nichol. Instead of more traditional biofouling paints, which leach copper, the project is looking at a type of vinyl, creating a Teflon-like surface.

Increasingly AutoNaut’s USVs, including a sensor payload in a fin unit, have been made easier by the use of 3D printing, says Nichol, which not only makes producing parts (mostly with a nylon resin) easier (e.g. moulds don’t have to be made to create some parts and the amount of complex machining is reduced), but also allows for more flexible design, i.e. it’s not constrained by manufacturing methods. The stern cone, fins and hull mounts have all been 3D printed, for example. However, while 3D printing has been adopted for many AutoNaut components, they’re reverting to glass fibre for the foils for the extreme environments USV, mainly for additional strength, says Nichol.

Other work has involved resilience trials – dropping a full-size USV from 5m at “unfair” angles (AutoNaut is already storm proven in the Atlantic, capsizing and self-righting in large breaking waves) and impact testing with blocks of ice. But it’s not all about physical characteristics of the USV – there’s also been work on neural networks and artificial intelligence to manage and summarise data gathered so data can be transmitted in real time via satellite to shore.

The result – being built at the time this article was being written – is expected to undergo initial trials this October-November. 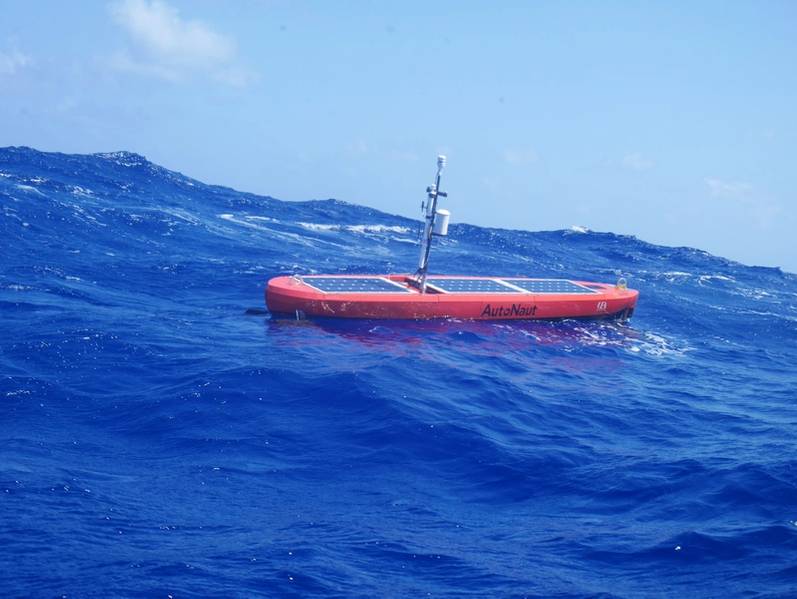