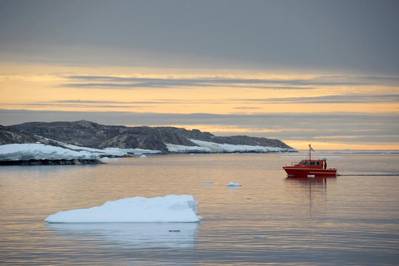 The team sailed from Hobart in RSV Aurora Australis on December 11, 2013 to conduct a hydrographic survey in the vicinity of Casey Station, a permanent base in Antarctica managed by the Australian Antarctic Division (AAD).

The Officer in Charge of the survey team, Lieutenant Peter Waring, said the cold climate task was challenging and fascinating: “We conducted the survey from onboard the Australian Hydrographic Service’s nine meter Antarctic Survey Vessel, Wyatt Earp, which was embarked in Aurora Australis for the Navy mission.”

“We sailed the Wyatt Earp from Aurora Australis seven times in conditions of extreme cold to collect high quality data, measure depth through soundings and carefully record observations,” Waring continued. “The information will determine under-keel distances for vessels that wish to sail in the region and enable safe passage by mariners.”

The gathered data will also assist the AAD with scientific research and monitoring of the environment around the Antarctic stations.

Commander Australian Fleet, Rear Admiral Tim Barrett, said the Australian Hydrographic Service is a vital Australian Defense Force capability with a valuable national role: “The countries that are party to the Antarctic Treaty have reiterated the importance of efforts to conduct surveys and improve charts in the region.”

Barrett added, “Australia plays its part by completing surveys and through participation in the International Hydrographic Organization’s Hydrographic Committee on Antarctica.”

The Royal Australian Navy’s hydrographic ships, aircraft and people chart more than one-eighth of the world’s surface stretching as far west as Cocos Island in the Indian Ocean, east to the Solomon Islands, and from the Equator to the Antarctic.

Where do old boats go to die? The cynical answer is they are put on eBay for a few pennies in the hope they become some other…