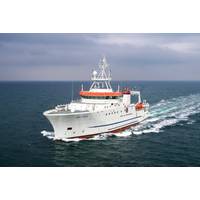 vessel Baía Farta to the Angolan Ministry of Fisheries. The vessel will remain in Galati until November, when she will set sail for Angola where the final delivery will take place.With a 1,600 km Atlantic coastline, the development of the domestic fishing industry is a priority of the Angolan government and it currently employs over 100,000 people in both commercial and artisanal fishing.The Baía Farta, a Damen FRV 7417 type vessel ordered in July 2016 and officially launched in November 2017, is equipped for the full range of fisheries research and assessment activities including hydrograph