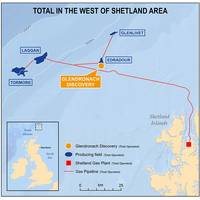 ; Glenlivet fields, as well as the Shetland Gas plant, all of which contribute to about 7 percent of the UK gas consumption."Glendronach is a significant discovery for Total which gives us access to additional gas resources in one of our core areas and validates our exploration strategy," Arnaud Breuillac, President of Total's Exploration & Production division, said in a statement.Wood Mackenzie North Sea research analyst Kevin Swann said it was the largest conventional discovery in the United Kingdom since Culzean in 2008, and it could contribute as much as 10 percent of the UK's

Total, Chevron Team up in Gulf of Mexico Oil Exploration

, increases Total’s footprint in the USA GoM where it can apply its exploration expertise and deepwater technologies. Total values Chevron’s performance as a GoM deepwater company and this agreement expands a successful co-ownership already in place on the Tahiti field”, stated Arnaud Breuillac, President Exploration & Production. “As a continued effort to highgrade its portfolio, Total won six offshore exploration licenses in the August Lease Sale.”   Total has been active in exploration and production in the United States since 1957. In the Gulf of Mexico,

Total, the project will have a production capacity of 10 million cubic meters of gas per day (70,000 barrels of oil equivalent per day (boe/d)). "Vega Pleyade is Total's second start up this year and will contribute to our production growth in 2016 and for the years to come,” commented Arnaud Breuillac, President Exploration & Production. “The project consists of the development of one of the largest offshore gas fields in Argentina and is the world's southern-most gas development. It will allow us to maintain the level of our operated production in Tierra del Fuego at around 18

output capacity estimate for the project, located in Angola's offshore Block 32 and due to start up in 2017, to 230,000 bpd from 200,000. Half of the cuts came from a reassessment of the project's specifications, using a "'just good enough' approach rather than 'the best possible'," Arnaud Breuillac, the company's exploration and production chief, told Platts on Friday.   The company decided, for example, to build its two 115,000 barrels-per-day (bpd) floating production storage and offloading units by making alterations to two very large crude carriers (VLCCs) instead of building