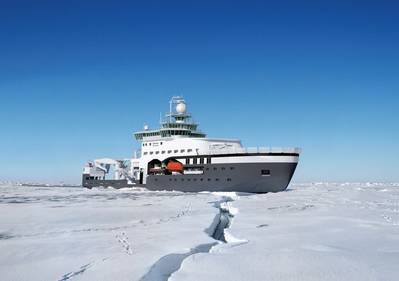 The ship will be named “Kronprins Haakon”, in honour of the heir to the Norwegian throne and will be built in Italy in the Fincantieri integrated shipyard in Riva Trigoso-Muggiano, before undergoing final outfitting and sea trials in Norway at VARD – a member of the Fincantieri Group.

The new vessel, designed by Rolls Royce Marine, is due to be launched in the second half of 2016, and to be fully operative from the beginning of 2017. The project, promoted by the Norwegian government, has a total value of about 175 million euro.

With a gross tonnage of 9,000 tonnes, a length of over 100 metres and a breadth of 21 metres, the vessel will be able to accommodate 55 persons in 38 cabins - research personnel, students and crew - and will be fitted out with the highest standards of comfort for passenger ships. At the bow, its hangar will be able to accommodate two helicopters and will be equipped with complex instrumentation able to investigate the morphology and geology of the seabed.

The ship will be one of the most advanced icebreakers in the world, and will provide a high-tech facility for the study of the marine environment. It will be built according to criteria that ensure minimum environmental impact and reduced radiation of noise underwater so as to allow studies on fish and marine mammals and it will be able to carry out its oceanographic and hydrographic research activities worldwide.

Elisabeth Aspaker, the Norwegian Minister of Fisheries and Coastal Affairs, declared: “The purchase of this new research vessel will contribute to the knowledge of the ecosystems in both the Arctic and Antarctic regions. It is an instrument of great importance not only for our Country, but for the whole international scientific community”.