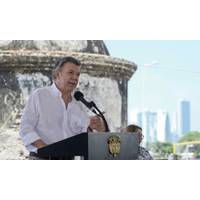 600 people died in the shipwreck when an English fleet engaged the galleon in a gun fight.   A team of international experts, the Colombian navy and the country's archaeology institute discovered the wreck in 2015.   The San Jose was the subject of a legal dispute between Colombia and Sea Search Armada, a U.S.-based salvage company, which said in 1981 it had located the area where the ship sank.   The company and the government agreed to split any proceeds from the wreckage, but the government later said all treasure would belong to Colombia, a view that was backed by a U.S. court

V as he fought the English during the War of Spanish Succession. "Great news! We have found the San Jose galleon. Tomorrow we will provide details at a press conference from Cartagena," Santos tweeted. The government's claim on Friday did not shed light on a legal wrangle with Sea Search Armada, a U.S.-based salvage company which had a long-standing suit against Bogota over ownership of the wreck. SSA said in 1981 it had located the area in which the ship sank. SSA and the government were partners back then and following international custom, they agreed to split any proceeds.

A group of investors sued the Colombian government for preventing American salvage group Sea Search Armada from recovering San Jose, a ship that sank in 1708, often referred to as the “Holy Grail of Shipwrecks.” With numerous court rulings throughout the years, the battle has lasted since 1979. In a case filed March 29 with the Inter-American Commission on Human Rights (IACHR), a group of American investors claimed the government of Colombia violated their human rights by preventing them from salvaging their jointly owned property, a Spanish galleon sunk in 800 feet of water near