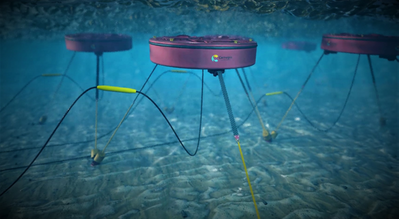 CETO is a fully submerged, point absorber type wave energy technology. A submerged buoy sits a few meters below the surface of the ocean and moves with the ocean’s waves. This orbital motion drives a power take-off (PTO) system that converts this motion into electricity.

Carnegie said the cooperation with HPE would extend the artificial intelligence development already underway at Carnegie.

Hewlett Packard Labs will contribute their reinforcement learning (RL) expertise and computational resources to the project, working alongside Carnegie’s team, which is already developing an intelligent controller for the CETO technology.

The RL based controller development in this project will occur in parallel with, and provide an opportunity to enhance, the Carnegie team’s ongoing work on a machine learning (ML) based intelligent controller.

Reinforcement learning is an area of artificial intelligence in which a machine learning model is built with the ability to self-learn.

While the intelligent controller currently under development has to optimize the device’s response for every wave (using ML models within the optimisation), the RL controller has the ability to directly learn and apply the optimum response to predicted waves, during operation.

Reinforcement Learning control applied to CETO The RL controller uses input from the environment (predicted waves), the state of the CETO system (how it responds to the environment), and rewards from previous actions, to determine how to optimally control the system

The RL controller, which comes pre-loaded with a simple control scheme, explores away from this reference using the concept of reward to identify and learn good control actions, Carnegie said.

What this means for wave energy is that a RL based controller can move beyond optimizing CETO’s response using an ML model of the system trained on simulated data.

A RL based controller can actively adjust, experiment, learn, and optimize by utilizing what actually happens during operations, Carnegie said.

Initially, Carnegie envisions that a RL based controller would likely use a power-output-based reward to learn optimum operation.

Over time, the controller could become more advanced and could ultimately use a reward based on Levelised Cost of Energy (LCOE), thus incorporating a range of variables into its operation (including not only energy production but also elements of operations and maintenance costs such as fatigue, avoiding large damaging waves, and even commercial considerations.)

"The teams at Carnegie and HPE look forward to working together to pursue this exciting innovation which has the potential to improve the performance and reduce the cost of the CETO technology and revolutionize control of wave energy converters," Carnegie said.

CGG delivered the fast-track data from its Agata Reimaging program over the Agata block in the Santos Basin, a highly prolific…