FAU to Develop Use of USVs for Bridge Inspections 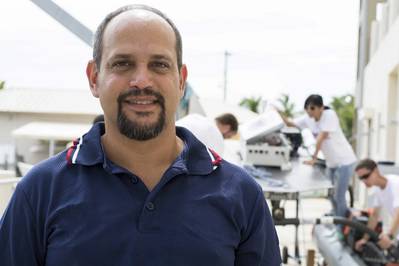 The task of inspecting and maintaining Florida’s network of approximately 11,450 bridges is arduous, especially since so many of the state’s bridges span rivers, canals and saltwater areas. Researchers in the College of Engineering and Computer Science at Florida Atlantic University have received a one year, $187,000 grant from the Florida Department of Transportation (FDOT) to research and develop the use of unmanned marine vehicles for on-water bridge inspections. Unlike manned vessels, which are continuously teleoperated by a human user, unmanned surface vehicles or USVs are capable of operating autonomously without human intervention for prolonged periods of time.

“Technological solutions that can help make the bridge inspection process less costly, more efficient and safer for personnel are vital,” said Mohammad Ilyas, Ph.D., dean of FAU’s College of Engineering and Computer Science. “Although 25 percent of bridges in the U.S. are considered deficient or obsolete, Florida is ahead of the curve and ranks among the lowest nationally in terms of the percentage of bridges that are considered structurally deficient.”

Bridges that span warm seawater are especially susceptible to corrosion. The “splashzone” is the section of a bridge piling or support structure at the water’s surface where seawater repeatedly splashes and then evaporates in the wind and sun, leaving behind a thin residue of concentrated salt. The salt from this residue diffuses into bridge pilings and can very quickly cause steel portions of the structure such as the rebar inside of concrete pilings to corrode. Regular examination of these bridge supports is very important, and the FDOT inspects each of the 11,450 bridges at least once every two years, and more often when necessitated by age or structural concern.

“The inspection of bridge pilings at the waterline and underwater can be difficult,” said Karl von Ellenrieder, Ph.D., principal investigator of the grant and professor in the Department of Ocean and Mechanical Engineering and associate director of the SeaTech Institute for Ocean Systems Engineering at FAU. “Fast flowing tidal currents, waves, strong coastal winds, and the presence of wildlife are common environmental factors that can make water-based bridge inspections difficult and sometimes dangerous for personnel.”

Visual and tactile examination by divers is the primary method used for underwater bridge inspections. Tactile exams become necessary when the water is murky and human inspectors must touch or feel bridge structures to detect flaws, damage or deterioration. Furthermore, it can be very difficult to quantify the results of this technique.

“In recent years, USVs have been increasingly used in many applications including ocean sampling, maritime search and rescue, hydrologic surveys, harbor surveillance and defense,” said von Ellenrieder. “The main goal of our project for the Florida Department of Transportation is to develop the capability for USV-based bridge inspections.”

USV research advances that are particularly promising for bridge inspection include automatic path planning where new vehicle trajectories can be updated in real-time based on mission goals and vehicle state, remote supervisory control where a remote human user can update a USV’s high-level mission on-the-fly, and active mapping where USVs can be used to automatically build and update a map of their operational environment.

“From a design standpoint, one of the main advantages USVs have over manned vessels is that their configuration does not need to accommodate the space and safety requirements of human operators,” said von Ellenrieder. “Because of this, USV design can be more highly optimized according to sensing, maneuvering or deployment needs.”

von Ellenrieder and his team will provide recommendations to the FDOT on how USVs can be best used to conduct or assist bridge inspections. As part of the project, they will perform several on-water, proof-of-concept, USV-based bridge inspection demonstration experiments in collaboration with the Gulf Unmanned Systems Center of Carrabelle, Fla. at sites in northern Florida using a USV developed at FAU.