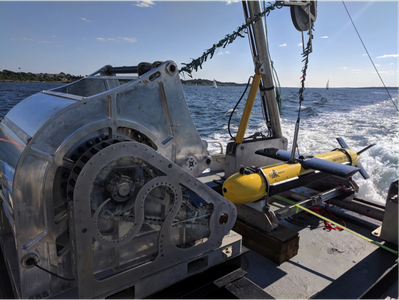 U.S. Navy Vice Admiral Michael Connor (retired), ThayerMahan’s President and CEO, said, “It’s our fundamental mission to integrate and deploy the latest sensors, robotics and machine learning technology as affordable and innovative solutions to the United States and allied navies. I’m very pleased that during ANTX ThayerMahan and Kraken demonstrated superior resolution and range relative to competing systems costing many times more; live streaming of target detection results to remote maritime operations centers at sea and ashore; excellent area coverage rates, real-time performance and ease of operation for the sailor. There is no doubt in my mind that SeaScout offers a compelling price and performance advantage to competitive systems.”

“ANTX 2018 was a great example of how our strategic alliance with ThayerMahan enables us to increase exposure and awareness within the U.S. Navy and expand our products into potential new revenue opportunities,” said Karl Kenny, Kraken’s President and CEO. “Employment of manned/unmanned teams and technologies will transform modern naval warfare, by leveraging sensor and robotics technologies to provide significant force multiplier advantages for the warfighter.”

During the ANTX 2018 exercise, ThayerMahan and Kraken personnel successfully and repeatedly deployed and demonstrated SeaScout – an expeditionary system for seabed mapping and intelligence. The SeaScout system incorporates several modules:

ANTX 2018 is an annual, invitation-only event that was created by the U.S. Navy to see the future of naval technology in action today. Warfare centers, other Navy commands, universities and industry leaders are invited to showcase their technologies and capabilities during this event. The event provides an opportunity to test new unmanned systems and related technologies, while gaining access to U.S. Navy test ranges, facilities and people.

There is a growing international trend of defense dollars being spent on drone development. In its fiscal year 2019 budget, the U.S. Department of Defense requested US$9.6 billion for unmanned technology and related systems — a 28 percent increase from the previous year, according to a report released June 25 by the Association for Unmanned Vehicle Systems International.

“Unmanned systems and robotics are key technology areas that enable the United States to counter the range of evolving threats posed on the modern battlefield,” AUVSI president and CEO Brian Wynne said. The Navy has led all service branches in dollars put toward drones for at least the past three years, according to AUVSI. More than half of all drone projects for the land, air and sea are under the Navy’s purview.

While air-based drones make up most unmanned technology projects across the services with about US$7 billion earmarked for 2019, maritime drones are increasing in interest. About US$1.3 billion of drone-funding requests support maritime drones, according to the AUVSI report. The MK 18 Unmanned Undersea Vehicle was a highlight of the 2019 budget request, with the Pentagon asking for US$75 million for the underwater drone mainly used for mine countermeasure operations, according to the AUVSI report. Other purposes for underwater drones used by the Navy include data collection and surveillance.

Earlier this year, the U.S. Navy released a summary of its “Strategic Roadmap for Unmanned Systems,” stating the integration of drones in the service “offers many advantages such as reducing personnel and manpower, risk to personnel and operating costs.”