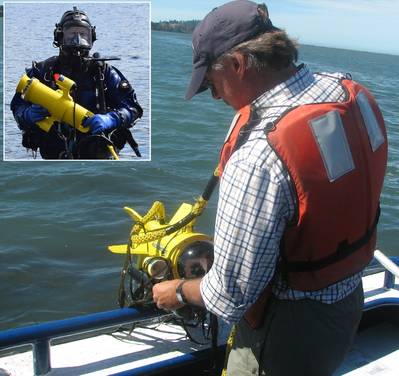 Underwater video is now routinely used by a variety of government agencies in an array of projects from search and recovery operations to research and exploration. The type of system commonly used in these applications consists of a video camera mounted in a waterproof housing with a long cable connecting it to a monitor on the surface where the picture is viewed and recorded. There are numerous advantages of having a system that sends live video to the surface. Many law enforcement agencies and public safety dive teams put down a camera instead of a diver in the initial stages of an underwater search to save time and increase safety. They can make a permanent record of a dive site, search operation, underwater crime scene, or evidence. These video systems also help scientists study the health of the aquatic environment and its marine inhabitants.

One agency utilizing the underwater video system is the National Oceanic and Atmospheric Administration (NOAA) Office of Coastal Management. Their primary mission is to provide data and tools to other government agencies, private sector organizations, and the scientific community, to help in making more informed decisions. Issues run the gamut from protecting endangered species, to erosion, to developing more storm-resistant buildings. One of the tools their scientists use to gather data on the health of our oceans is JW Fishers TOV towed video system which has a camera mounted in the nose of a torpedo shaped housing. The system is towed by a boat and the camera “sees” what a diver would see, but has the advantage of being able to stay submerged for an unlimited amount of time without concern of getting cold, running out of air or need for decompression.
Mark Finkbeiner, Division Chief of Science and Geospatial Services at the office, reports his team has been using the TOV for years and “it’s still our workhorse.” The camera was deployed in shore mapping project for the state of New York where it surveyed parts of Hempstead Bay, Moriches Bay and Great South Bay. “In Hempstead Bay, we saw the sea lettuce algae that can overwhelm these bays if nutrient levels are too high. The TOV was also instrumental in mapping California’s Humboldt Bay to identify areas for possible marine protection, and in a shallow water mapping project in San Francisco Bay to study the health of eel grass, which is a priority habitat for the state.”
Another agency successfully using the towed video system is Boone County Water Rescue in Kentucky, a division of Boone County Emergency Management. The group of 39 volunteers work more 12,000 hours annually in water rescue activities, and are long time members of the International Association of Dive Rescue Specialists (IADRS). The water rescue team patrols and responds to incidents on the Ohio River and other waterways within the county. The team has been using the Fishers towed video systems for a number of years and Captain Dale Appel reports, “the TOV has helped us recover many drowning victims, locate evidence, find submerged vehicles, sunken vessels and many other things.”
Sterling Fire Department in Massachusetts and Morton County Sheriff’s Department in South Dakota are also using the video system to assist in their underwater operations. Both departments have JW Fishers DV-1 drop video which is lowered from the boat on a Kevlar reinforced cable to within a few feet of the bottom. The underwater housing is equipped with two powerful 1,500 lumen LED lights and a high-resolution color camera. The system is ideal for searching small areas or verifying targets that have been located with other search systems like sonars. The housing can also be carried by a diver to film an underwater site. Topside the video system connects to the VRM-1 which has an ultra-bright flat screen monitor mounted in rugged waterproof case and a DVR that records up to 12 hours of video on a SD card which can be played back on a computer. Sterling’s dive team leader Robert Nickerson reports, “the DV-1 helped us inspect an intake pipe in a local reservoir. The system works really well, and Fishers attention to customer service and their ability to go above and beyond has been nothing short of outstanding.”
A few of the many other agencies and dive teams using Fishers video systems are the Rochester Police and Wayne Fire Departments in New York, Environmental Agency Abu Dhabi in the United Arab Emirates, Missouri Highway Patrol, Boston Police Special Operations Unit, Kuwait Institute for Scientific Research, Los Angeles County Sheriff’s Dept., University of Maine’s Darling Marine Center, Hartford Police Dept. in Connecticut, Arkansas Game & Fish Commission, Solano Dive Rescue Team in California, NOAA Great Lakes Environmental Research Lab, Roswell Fire Dept. in Georgia, Flathead Lake Biological Station in Montana, and Tampa Bay Aquatic Preserves in Florida.
• California • Connecticut • dive site
Email