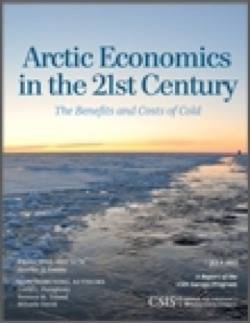 Center For Strategic & International Studies' (CSIS) has published 'Arctic Economics in the 21st Century: The Benefits and Costs of Cold'.

The report, with contributions by  David A. Pumphrey, Terence M. Toland, and Mihaela David, explores the key economic dynamics at play in the rapidly changing Arctic region.

It evaluates both the economic benefits of an increasingly open Arctic region and the costs of exploring the riches of the American Arctic.

The report frames an economic strategy built upon six critical economic components: mineral resources, oil and gas development, shipping, fisheries, tourism, and finally, the regional infrastructure required to support and sustain the first five components. The report analyzes the increasingly prominent role of the private sector in Arctic development and its interplay with the potentially diminished traditional role of governments in the region.

The publishers are CSIS/Rowman & Littlefield.

A .PDF version of the report is available at: http://csis.org/files/publication/130710_Conley_ArcticEconomics_WEB.pdf