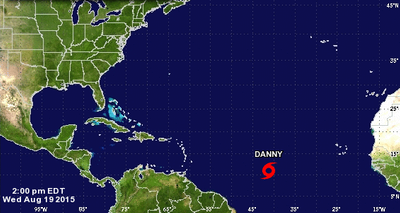 Tropical Storm Danny is on track to become the first hurricane of the 2015 Atlantic season by Friday and could approach the Caribbean islands by the late weekend, the U.S. National Hurricane Center said on Wednesday.
It is still too early to predict whether Danny, currently a tropical storm with winds gusting up to 50 miles per hour (85 kph), will impact the United States, said Dennis Feltgen, a meteorologist and spokesman for the hurricane center in Miami.
Danny is the fourth named storm of what is expected to be a quieter-than-normal Atlantic hurricane season, he said.
Earlier this month, U.S. government weather forecasters updated their 2015 predictions, saying they expected six to 10 named storms, with as many as four reaching hurricane status of at least 74 mph (120 kph) winds.
At most, only one of the storms is considered likely to develop into a major hurricane, according to the National Oceanic and Atmospheric Administration's latest outlook.
"Danny is a great reminder that we have now entered the start of the peak the hurricane season," Feltgen said, adding that the Atlantic season runs from June 1 through Nov. 30.
"Don't think for a second that anybody is off the hook," he said.
So far this year, two tropical storms have hit the United States, with Ana making landfall in South Carolina in May and Bill drenching Texas in June.
A major hurricane has not struck the U.S. coast since 2005, although Superstorm Sandy was near hurricane strength when it flooded downtown Manhattan and the New Jersey shore and killed 158 people in October 2012.
Contributing to this year's expected weak hurricane season is the El Niño weather pattern as well as below average sea-surface temperatures in the tropical Atlantic, according to NOAA.
(By Letitia Stein; Editing by Frank McGurty and Susan Heavey)
• Caribbean • Caribbean islands • National Oceanic and Atmospheric Administration
Email