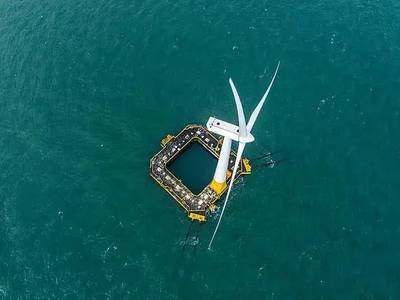 French offshore vessel operator Bourbon has won a contract to support the construction of the Eolmed project, a recently sanctioned pilot floating wind farm in the Mediterranean Sea, offshore France.

The wind farm, owned by Qair, TotalEnergies, and BW Ideol, will consist of three floaters, each fitted with 10 MW turbines.

This 30 MW project is located more than 18 km off the coast of Gruissan and Port la Nouvelle (Occitan region). The start of production is expected by mid-2024.

Bourbon will be responsible for the offshore installation works, and its scope includes the detailed design, procurement, and fabrication of the floating electrical hub, inter-array cables, anchoring, and mooring systems.

Since 2011, Bourbon has installed most of the  Floating Wind Turbine prototypes worldwide, including those in Portugal, France, Scotland, and Norway.

“We are very happy of this partnership with Eolmed. Thanks to the effort of the team and the trust of the EolMed partners, we are on the path to initiating a great milestone for the development of floating wind in Europe. This award demonstrates also our capabilities to undertake wide EPCI offshore projects,” says Patrick Belenfant, CEO of Bourbon Subsea Services.

This wind farm will have a total capacity to produce nearly 100 million kWh per year, i.e. the annual electricity consumption of 50,000 households.

According to information on the website of the European Investment Bank (EIB), the total cost of the project is estimated at around 289 million euros (around $304 million). Of the total amount, EIB will provide 85 million euros.