In a hotel conference room on Long Island, New York, a team of experts are processing data and information on computers. Alongside them is a large display monitor screen that's projecting the information.

"It's a beautiful thing. On the screen they are able to observe the condition of New York's and New Jersey's coastlines almost in real-time," said Jeffrey Cusano, Geospatial Coordinator, New York District, U.S. Army Corps of Engineers.

The team is the Joint Airborne Lidar Bathymetry Technical Center of Expertise.  Recently, Cusano and other members of the U.S. Army Corps of Engineers, New York District seized the opportunity to use this team to obtain cutting-edge survey data about the current condition of New York and New Jersey's coasts.

Not only did the team get the data to them fast, but the Army Corps is already using it to monitor and cost-effectively improve its coastal projects, as it enters the Atlantic Hurricane Season.

Earlier this year, the Army Corps tapped the expertise of the JALBTCX that is based at the Army Corps' Mobile District in Alabama.
The center's team members perform operations, research, and development in various airborne geospatial technologies to support the coastal mapping and charting requirements for the Army Corps.

The center also partners with the Federal government, which includes the Army Corps, industry, and academia to further develop these technologies to meet its respective programs.

One of the center's programs is the National Coastal Mapping Program. The mission's intent is to acquire regional, high-resolution, high-accuracy elevation and imagery data along the sandy shorelines of the United States on a recurring basis.

To obtain this data, JALBTCX uses an aircraft equipped with government-owned state-of-the-art airborne remote sensing platforms.
These platforms are comprised of a lidar sensor with both topographic and bathymetric capabilities, and two additional aerial mapping cameras.
The lidar's topographic capability measures the elevation of the coastline's beach and dune systems and its bathymetric capability measures the seafloor elevations.

The lidar sensor provides highly-detailed and very accurate elevation measurements both on land and under the water, while the two additional cameras provide very detailed images and spectral information from the same land and water.

This data is acquired along the sandy coastlines of the United States, approximately every five years. The last time JALBTCX flew over the coasts of New York and New Jersey was in 2017 and scheduled to fly again in 2022.  The Army Corps' New York District wanted to get this information sooner. 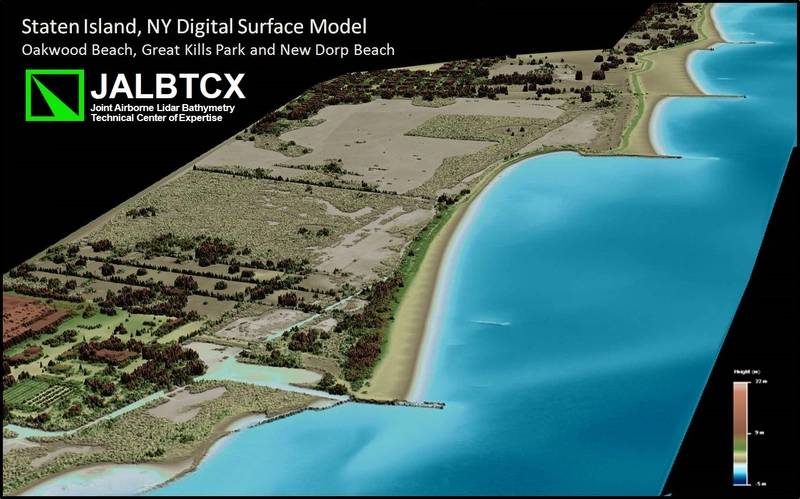 A sample of the type of elevation images the JALBTCX team developed for the U.S. Army Corps of Engineers, New York District.  This image shows the shoreline elevations along the coast of Staten Island, New York.  Credit: JALBTCX.

When the Army Corps discovered that JALBTCX had a small pocket of time available to do a fly, the Army Corps' district coastal team quickly worked together to take advantage of this opportunity.

"They wanted to understand the current coastal condition and how it compared to the 2017 condition to see what work needs to be done now to improve the condition of the coasts. This work may involve such things as sand replenishment and environmental work. They also wanted to see if the work they already performed is functioning well," said Cusano.

Over a two-week period in late January, the JALBTCX team flew their lidar and cameras over portions of the New York and New Jersey coasts.
The Army Corps' coastal team worked closely with the JALBTCX team to design flight plans that would produce good data coverage over New York District's coastal projects.

Approximately, 157 miles of coast was flown. The area included a stretch of coast from Manasquan Inlet to Sandy Hook, New Jersey, a portion of Staten Island, New York and another stretch on Long Island from Rockaway Inlet to the tip of Montauk Point, New York.

The Army Corps projects the flights covered can be viewed in the SIDEBAR "U.S. Army Corps of Engineers, New York District Coastal Projects."
To capture the best data, the flight crew flew primarily during daylight hours at or near low tide, at an altitude of 1,300 feet above ground level and at an air speed of 140 knots. They flew overnight operations only in the vicinity of John F. Kennedy International Airport in order to work with existing airspace restrictions.

The survey aircraft operated out of the Long Island MacArthur Airport, in Ronkonkoma, New York. Nearby, in Islip, New York, the JALBTCX team stood up a flight operations and data production center in a hotel conference room.

There the team stored its equipment, conducted twice-daily flight operations meetings, and networked a series of computers that were used to download data from each day's flights, process and quality control the data, and develop it into data products for use by the Army Corps.
Cusano said, "They used these sensors to gather a swath of information all along the beach area that included between 1,000 and 2,000 meters of the nearshore and onshore area."

In addition, the JALBTCX team will soon provide the Army Corps with what is called a Change Analysis. To perform this analysis, JALBTCX used this newly-acquired 2020 continuous digital elevation dataset and compared it to their dataset from the last time they flew in 2017.  Results will reveal where erosion or loss of sand occurred and where deposition or accumulation of sand occurred along the coastlines of New Jersey and New York between 2017 and now.

Cusano said, "We now have valuable information that shows us where there may be storm damage and sand loss that requires repairs. It also shows us how we are progressing with on-going coastal projects, of which we have done many in the last three years."

Suzana Rice, Senior Coastal Engineer, New York District, U.S. Army Corps of Engineers said, "This data is a great tool for us to monitor and understand our coastlines, and compare data from previous years, to use during the 2020 Atlantic Hurricane Season."

She added that the timeliness of the data, having been delivered only in ten business days after the last flight, was helpful and enabled one particular coastal project to move along faster. "Because of this new data, we were able to expedite the pre-construction engineering and design phase of the Fire Island Inlet to Montauk Point Project."

She added that this data is also being used to cost effectively create the plans and specifications for the Fire Island Inlet to Moriches Inlet Emergency Stabilization Project.

When plans and specifications are created by the project team, the team has to have an idea of how much sand will be needed to replenish the beach.  Without this JALBTCX data, traditional surveying techniques would have had to be done and this would have taken longer and been more expensive.

The JALBTCX data is also being used to perform environmental work on some of these coastal projects.

Robert Smith, Senior Biologist, New York District, U.S. Army Corps of Engineers said, "The data is being used to design and track changes to habitats we built for endangered species, such as the Piping Plover, an endangered bird that nests along the shore in the summer.  We built habitats for the plovers for it to nest and forage."

This data is valuable to the Army Corps' projects, and also educates the public about our projects.

Cusano said, "This past fall we had a number of nor'easters that caused coastal damage. Because of this, residents contacted us.  They sought information about damages and if rebuilding was needed. We were able to use the data to better respond to their inquiries."

This data is also available to the public and other agencies. The JALBTCX team posts the data on the National Oceanic and Atmospheric Administration's Digital Coast website. The website is a multiyear archive of survey data acquired along U.S. coasts by partners in the Federal mapping community and some state agencies.

A person is able to search for a specific coastal area, learn about available data, customize exactly what they want to view - using the multiple layers of information available, and save the information in the format they can use for their intended purpose.    To view the dataset the JALBTCX gathered recently for the Army Corps' New York District, please visit: https://coast.noaa.gov/dataviewer/#/lidar/search/where:ID=9000

Cusano said, "In my opinion, this data is a win for everybody. It helps the Army Corps monitor and cost-effectively improve our coastal projects and it helps our agency educate the public about their coasts and the work we are doing for them, as we begin a new Atlantic Hurricane Season."
This all would not have been possible if the Army Corps' coastal team didn't have the drive to pursue this valuable data.  They saw the opportunity and they took it.

Dr. JoAnne Castagna is a Public Affairs Specialist and Writer for the U.S. Army Corps of Engineers, New York District.  She can be reached at joanne.castagna@usace.army.mil