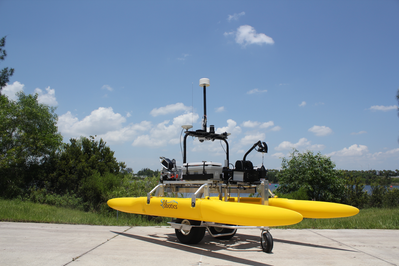 A new autonomous surface vehicle (ASV) has been delivered to the U.S. Army Corp of Engineers for rapid post-hurricane hydrographic surveys in the Caribbean.

After a severe climatic event, such as a hurricane, hazards to navigation impede the rapid delivery of aide as well as access to critical infrastructure through ports and harbors. Use of the SeaRobotics Corporation’s 3.6-meter, collapsible ASV will allow rapid deployment and completion of the hydrographic surveys necessary to reopen infrastructure enabling delivery of life saving goods and services.

“SeaRobotics is pleased to participate in improved disaster recovery efforts implemented by the USACE. As a Florida company, we are directly impacted by the need for rapid hurricane response and thrilled to be involved in the solution,” stated Don Darling, president of SeaRobotics Corporation.

“The rapid deployment and ease of assembly of the ASV, as well as the capability to launch the ASV from non-traditional locations will expedite the availability of crucial hydrographic survey results,” explained Geoff Douglass, ASV development manager at SeaRobotics.

In addition to the hydrographic survey payload, the ASV includes excellent situational awareness and enunciation aides. An automatic identification system (Class B AIS) is used to identify and track other vessels in the area and to enunciate the position of the ASV. Other aides include a real-time viewable PTZ video camera, navigation lights, an autonomous and remotely operated horn, a LIDAR based obstacle detection system, and streamlined data acquisition line planning and post processing interface system utilizing a SeaRobotics’ specific ASV driver for HYPACK Survey and HYSWEEP.

BLUEROC: ROV Control in a Box

A number of ROV operations are expensive due to high cost of equipment and complex operation setup. Depro AS and VideoRay LLC have developed a new…

Rowe Technologies designs and manufactures high performance acoustic Doppler products and systems for navigation (DVLs) and oceanographic applications (ADCPs) for use in oceans, lakes, and rivers. We have a wide variety of products for use in real-time and self…
Sponsored