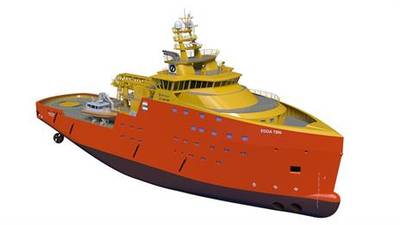 Denmark's DONG Energy said on Thursday it would build a multi-million-dollar maintenance hub in Grimsby, northeast England, to provide services for its offshore wind operations.

The new facility would, subject to planning approval, be built at the town's Royal Dock and provide maintenance support to the company's wind farms in the region.
"It represents a massive vote of confidence to the UK offshore wind industry and confirms our commitment to the Humber region where by 2019 we expect to have invested around 6 billion pounds ($7.8 billion)," Brent Cheshire, DONG Energy's UK country chairman, said in a statement.
DONG has two operational wind farms on the east coast of England, Lincs and Westermost Rough, and two further projects, Race Bank and Hornsea One, under construction.
These wind farms combined are expected to provide electricity to around 1.5 million homes.
Offshore wind farms typically have annual maintenance checks, which are one of the largest running costs due to their location several kilometres out at sea.
The Grimsby site would house service operation vessels, supplied by Norwegian shipping company Ostensjo Rederi and designed by Britain's Rolls-Royce, which will be capable of accommodating up to 60 crew and technicians and remaining at sea for long periods, DONG said.
(Reporting by Susanna Twidale)
• Denmark • east coast of England • electricity