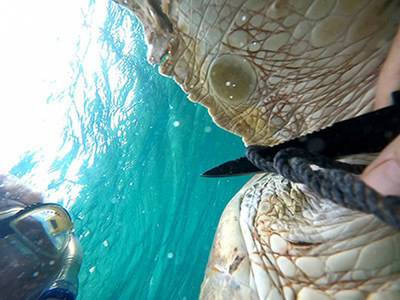 On July 13, these two worlds collided when a large endangered green sea turtle was found ensnared by fishing lines and nets in AUTEC’s harbor.

Mike Beres, a member of the AUTEC Fire and Emergency Services Water Rescue Team, spotted the entangled turtle and noticed that it was struggling to surface for air, bound by tight rope and nets, immobilized by the heavy ball of debris caught on its shell.

After notifying the AUTEC team, Beres and fellow rescue swimmer, Greg Johnson, sprang into action to save the distressed turtle by safely cutting the debris off its shell. This was not an easy task as green sea turtle adults are known to measure 3 to 4 feet in width and weigh between 240 and 420 pounds.

The swift action of the members of the AUTEC Fire and Emergency Services Water Rescue Team saved the turtle’s life.

General Dynamics Mission Systems announced Thursday it has been awarded a $72.8 million contract from the U.S. Navy to retrofit…