Expendable Unmanned Vehicle for Mine Countermeasures 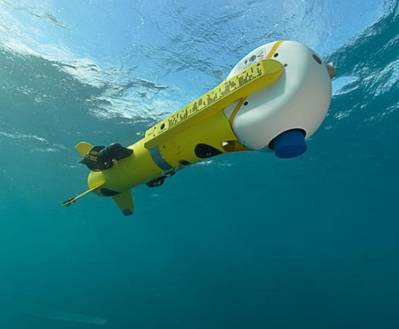 ECA Group said it has delivered a full scale development of an integrated solution for mine counter measure as part of a project completed in collaboration with an undisclosed Asian naval partner.

This Southeast Asian navy is changing how it performs mine hunting operations, opting for new unmanned systems instead of 50-meter boats managed by a crew of 40 people. The new unmanned systems not only significantly reduce the human risks involved with these operations, but are also controlled by three people, further slashing operational costs.
According to ECA Group , this unmanned solution for MCM operations is the first completely automated underwater robot demining system, including EMDS (Expandable Mine Disposal System) which can be remotely piloted and use a highly secured dedicated link for neutralization sequence. This ECA Group system completes the unmanned surface vessels (USV) built by a partner company.
The USV is equipped with an inspection function using the K-STER I and a destruction one using K-STER C. All the vehicles are launched autonomously with an automated launch and recovery system (LARS), remotely piloted via a radio or satellite link.
Onshore, crew launches and pilots remotely from the control and command center the inspection vehicle.
If a mine is found a Ddsposal vehicle KSTER C is deployed by a dedicated launching system, in order to destroy the mine.
This project is the result of more than 20 year’s partnership between Southeast Asian nations and ECA Group  and concluded with around €10 million ($12 million) contract back in 2015, the delivery of two complete systems in 2017 and expected service agreement in 2018. Sea acceptance tests of the first system is scheduled for September 2017.
The training for maintenance and usage of this unmanned naval drones system has been conducted end of May on the in ECA premises in South of France.
• ECA Group • France • satellite link