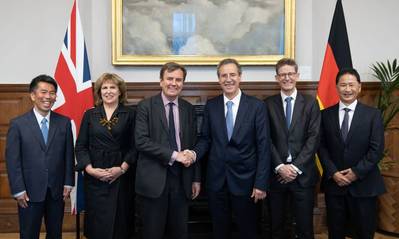 A financial agreement was reached on Thursday to build the first power cable linking Britain and Germany, with construction set to begin later this year as the two countries work to reduce dependency on Russian gas and increase the use of green energy.

Named NeuConnect, the 2.4 billion pound (2.8 billion euro) project link should be operational by 2028, and, at 725 kilometers (450 miles) in length, mostly under the sea, will be one of the world’s largest interconnector projects.

The cables could transfer up to 1.4 gigawatts (GW) of electricity to flow in either direction between Britain and Germany, according to a statement issued by NeuConnect.

"(Russian President) Putin’s illegal invasion of Ukraine shows it is more important than ever that we strengthen close energy bonds with European partners who are rapidly moving away from using Russian gas," British Energy and Climate Change Minister Greg Hands said.

The project is financed by France's Meridiam, Germany's Allianz Capital Partners and Japan's Kansai Electric Power 9503.T with a consortium of more than 20 banks and financial institutions, including the UK Infrastructure Bank and the European Investment Bank (EIB).

Ambroise Fayolle, vice-president at the EIB, which is set to contribute up to 400 million euros to the project, said: "This project is ground-breaking for the energy transition, as it makes it possible to use offshore wind energy more efficiently."

Deutsche Windtechnik announced it has signed several contracts for underwater inspections at offshore wind farms in the North Sea and Baltic Sea.