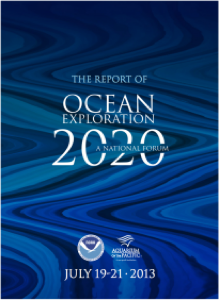 Report cover courtesy of Aquarium of the Pacific

The National Oceanic and Atmospheric Administration (NOAA) and the Aquarium of the Pacific have just released their co-authored report detailing plans for the nation’s first ocean exploration program. The report is the result of Ocean Exploration 2020, the first-ever forum gathering over 100 ocean explorers and other experts, which was held at the Southern California aquarium and organized by NOAA and Aquarium officials.

The report prioritizes geographic areas to be explored and details partnerships, technologies, and other components of this comprehensive national plan. . NOAA officials and Aquarium leadership plan to share the report with policymakers at the national level. The report will also be the subject of a special session of the Oceans 2013 conference in San Diego on September 26, 2013. “It is an honor to co-author a report that will help define the future of ocean exploration and lead to the nation’s first comprehensive ocean exploration program,” said Dr. Jerry Schubel, Aquarium of the Pacific president.

While the health and our understanding of the ocean are connected to the health of our nation’s economy, 95 percent of our ocean remains unexplored. However, experts hope that will change with the release of this national report. “The interest, enthusiasm and innovative thinking of the participants will most assuredly help set the foundation for a true national program of ocean exploration that combines the talents of individuals working in multiple government agencies, academic institutions, and the private sector,” said NOAA Office of Ocean Exploration and Research Acting Director John McDonough.

Participating organizations involved with the report includeNOAA, Aquarium of the Pacific, the Global Foundation for Ocean Exploration, the Schmidt Ocean Institute, Google, Inc., the Bureau of Ocean Energy Management, Esri, NASA, the National Geographic Society, the National Research Foundation, the Ocean Exploration Trust, the Roddenberry Foundation, the U.S. Geological Survey and the U.S. Department of State. Renowned explorers Sylvia Earle, Don Walsh, and Walter Munk were among those in attendance offering input, as were Google Earth creator Michael Jones and representatives from state and federal agencies.

The full report is now available at: aquariumofpacific.org/ocean_exploration_2020_report, and at: http://oceanexplorer.noaa.gov/oceanexploration2020/nationalframework.html