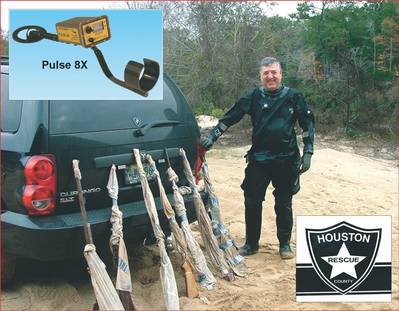 One group having great success with the underwater metal detector is Houston County Rescue in Webb, Alabama. Team members are highly trained public safety divers that provide assistance to law enforcement, emergency management, fire, and medical agencies upon request. Working in a joint operation with the Coffee County and Dale County Sheriffs Departments, HCR member Jeff May used his JW Fishers Pulse 8X detector to locate several rifles and shotguns thrown into the Choctawhatchee River running between the two counties. The weapons had been stolen in a burglary and their recovery was essential to prosecute the perpetrators.

In nearby Daphne County the local search and rescue team also used a detector to locate items taken in a robbery.  Lt Josh Gibbs reports several large industrial drill bits were stolen from a construction business and the criminals dumped them in a pond assuming they would lost forever. Using his Pulse 8X Lt. Gibbs recovered more than a dozen pieces of missing property which helped bring the suspects to trial.

Underwater metal detectors are so effective, and their use has become so widespread, that agencies training public safety divers are developing courses on how to best utilize these devices. One is the Underwater Crime Scene Investigation team at Florida State University. They developed a program that provides advanced training in crime scene investigation for aquatic environments. The focus is on operational techniques and protocols available to the underwater investigator.

According to training director Banyon Pelham students learn how to use a variety of the high tech tools including Fishers Diver Mag magnetometer and the Pulse 8X metal detector to locate weapons and explosive devices.