Gardline Surveying for i3 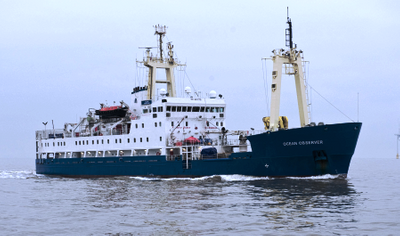 Independent oil and gas company i3 Energy said Boslkalis' marine survey subsidiary Gardline is performing a site survey for its 2019 and 2020 drilling program at the Liberator development and Serenity prospect, as well as the pipeline route for its Liberator Phase I development offshore the UK.

Gardline survey vessel Ocean Observer has begun working and is expected to complete the survey by the end of March, i3 said in an operational update on Friday.

The survey will cover the locations of Liberator's Phase I production drill center and associated development wells, in addition to the planned export pipeline route. Also being surveyed are the Liberator A3 and Serenity S1 appraisal well locations.

i3 said the survey will enable it to complete its environmental statement and provide the necessary engineering and environmental data to finalize its planning for its expected 2019 three-well drilling campaign and for inclusion in the Liberator field development plan (FDP).

i3 announced in January that it entered into a letter of intent (LOI) with Dolphin Drilling to use either the Blackford Dolphin or Borgland Dolphin semi-submersible drilling rig for a three-well appraisal and development drilling program to be conducted in June 2019. i3 will first drill the A3 appraisal well in Block 13/23c (Liberator West), then drill and suspend the first Liberator Phase I production well in Block 13/23d (L2) and complete the campaign by drilling the S1 well into the Serenity prospect.

i3's advancement of its integrated subsurface analysis  maps STOIIPs of 314 MMbbls in the Liberator field and 197 MMbbls in Serenity (using conservative assumptions on oil column thickness). If successful, the A3 appraisal well is expected to convert a portion of Liberator West's resources into reserves, in addition to determining the placement of the second Phase I production well (either L4 or L1), which would be brought onstream alongside the L2 well at a potential combined rate of up to 20,000 barrels of oil per day in mid-2020, i3 said. A third Phase I well is expected to be delivered in mid-2021 to maximize infrastructure utilization.

i3 said the S1 well at Serenity is intended to prove what it believes is a material extension of the Tain discovery, which is an unclosed oil-bearing structure immediately adjacent to the east into which there are four well penetrations. The A3 and S1 appraisal wells will allow the company to optimally size a standalone floating production storage and offloading (FPSO) facility for a potentially enlarged Phase II development which includes both the Liberator and Serenity fields. Upon the successful appraisal and development of Liberator and Serenity, i3 said it could potentially produce more than 200 MMbbls from its current licences.

i3 is assessing two offtake solutions to deliver first oil from Liberator Phase I by mid-2020 as it moves toward its final investment decision at FDP approval expected this year.

In December 2018, i3 received indicative terms from RSRUK for Liberator's use of their leased Bleo Holm FPSO facility via Ross field infrastructure, and the parties are working together agreeing the terms for Liberator Phase I construction and tie-in, and transportation, processing and operating services agreements. These agreements are expected to be finalized alongside the 2019 FDP approval by the UK Oil and Gas Authority.

As an alternative to the use of the Bleo Holm, i3 has also executed a memorandum of understanding (MOU) for the provision of a standalone FPSO for Liberator Phase I, eliminating its reliance on access to third-party operated infrastructure.