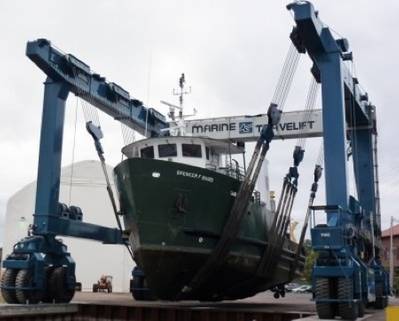 Great Lakes Shipyard has been awarded a contract by the U.S. Fish and Wildlife Service, an agency of the Department of the Interior, for the 5-year drydocking and inspection of the R/V SPENCER F. BAIRD.

The Shipyard hauled out the research ship using the 770-ton Marine Travelift. Work includes drydocking, a complete exterior repainting, bow thruster replacement, its five-year survey, and other miscellaneous repairs. The shipyard says that the project is to be completed early November 2013.

Operated by the U.S. Fish and Wildlife Service, the 95-foot BAIRD is a fish stocking and population assessment vessel that will annually stock nearly 4 million lake trout into lakes Huron and Michigan, furthering a four-decade effort by the Service and its partners to restore depleted lake trout populations in the Great Lakes and establish self-sustaining populations of this native fish, which was nearly wiped out in the late 1950s due to invasion of sea lampreys, overfishing and pollution.

According to Great Lakes Shipyard, of some 90 science vessels on the Great Lakes, the R/V SPENCER F. BAIRD is the only hatchery fish distribution vessel in operation, distributing fish reared at the Fish and Wildlife Service’s Iron River National Fish Hatchery in Wisconsin and Pendills Creek and Jordan River national fish hatcheries in Michigan.