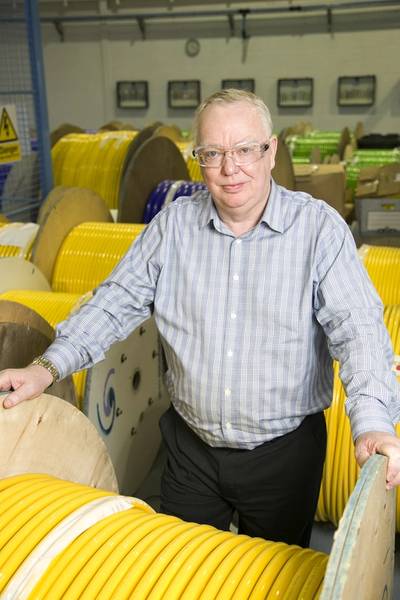 Doug Whyte, Hydro Group managing director at the Aberdeen headquarters, where products are manufactured from start to finish.

Subsea design and manufacture group Hydro Group said it is set to invest heavily in new equipment and increase staff numbers thanks to impressive demand from domestic and global markets.

Aberdeen-headquartered Hydro Group Plc, specialists in design, engineering and manufacturing of underwater cables and connectors for subsea, underwater, topside and onshore applications, has announced securing strategic contracts worth more than $3 million over the last quarter.

The contracts mean the group is on course to meet its turnover target of $13.9 million for 2014. At the end of 2013 the group reported a significant increase in market activity in all of the subsea business sectors it operates in and a record financial year as a result, with a 12% rise in comparable turnover from $10.2 million to $11.6 million.

Doug Whyte, Hydro Group managing director, said: “2012-13 was our most successful financial year to date, leading to significant investment in equipment and staff to keep pace with global demand.

“Our target turnover for 2014 is $13.9 million, with future projected growth predicted to reach $16.3million over the next two years.”

2010 saw the firm invest over $6.9 million in a state-of-the-art research, design, engineering and manufacturing facility at Aberdeen Science and Energy Park. Staff numbers have grown by 40% since 2010 and a further $816,000 is to be invested this year in new Cable Manufacturing machinery and Test Equipment, to allow Hydro Group to fully support increasing demands from customers in energy, defence and offshore renewables markets.

Whyte continued, “The team at Hydro Group are increasingly being asked for complex designs. Our engineers apply their extensive knowledge and expertise in materials and applications, developed over 30 years of manufacturing, to produce high quality products suited for their environment, this means investing in new equipment to keep pace.”

With an extensive product range, Hydro Group takes the raw materials and manufactures products from start to finish in Scotland, before exporting globally.

Investing in increased capabilities will see the firm create 20 jobs in Aberdeen before the end of the year. Further investment during the course of the year will be focused on Hydro Group’s innovative R&D program, including trialling various low smoke flame retardant materials to address single cable designs capable of operating between separate boundaries from topside to subsea.