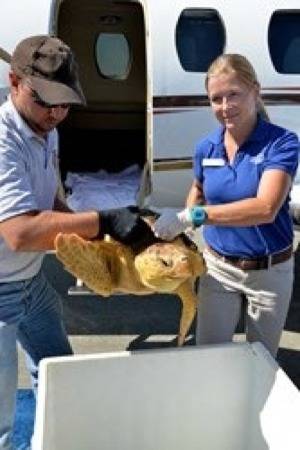 A private pilot from New Jersey stepped up to the plate to transport a threatened sea turtle to the South Carolina Aquarium Sea Turtle Rescue Program for treatment.

William Kindle, a board member for the Marine Mammal Stranding Center in Brigantine, New Jersey, flew the 75-pound juvenile loggerhead to Charleston on his Cessna Citation II aircraft. The injured sea turtle is now receiving treatment at the Aquarium Sea Turtle Hospital, bringing the total number of patients to seven.

The loggerhead sea turtle was found in early September at the Oyster Creek Nuclear Generating Station in Forked River, New Jersey missing the majority of its right rear flipper. Upon admission, staff at the Marine Mammal Stranding Center discovered that the turtle was not using its left rear flipper, essentially leaving it with no back flippers.

The Aquarium’s Sea Turtle Hospital staff, having just released three sea turtles back into the wild, responded to the Northeastern Sea Turtle Coordinator’s request for help for the sea turtle with long term treatment. Rehabilitation for the turtle will include physical therapy of the paralyzed limb and cold laser therapy for the wounded limb.

Designed for military use but now available commercially, OPENSEA Edge is designed to be a modular edge computing module…

Kraken Robotics announced that David Shea, Executive Vice President (EVP) of Products, will take on the additional role of…