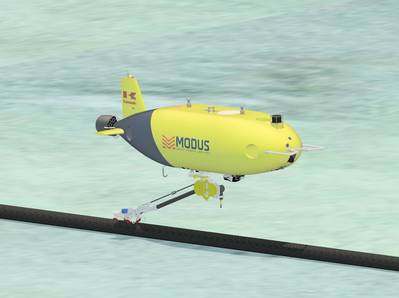 It has been designed and built by Kawasaki Heavy Industries for intelligent and low-logistic pipeline and subsea asset inspection operations down to 3,000 m water depth.

To support accurate and long-duration navigation on its missions, while minimizing complexity and payload space consumption, the vehicle is fitted with Sonardyne’s hybrid navigator SPRINT-Nav.

Two SPICE (Subsea Precise Inspector with Close Eyes) AUVs have already been ordered by UK-based subsea services company Modus Subsea Services for cable and pipeline inspections, as well as more conventional surveys. One is due to be delivered to Modus this year.

“Our goal with the SPICE AUV is to enable operational efficiency of inspection operations, to reduce cost and reduce the burden and risk experienced by crews working on support vessels offshore. We believe that Sonardyne’s instruments will support the highly accurate navigation of the SPICE AUV, supporting our goals,” says Noriyuki Okaya, Development & Design section, AUV Department Kobe Shipyard, at KHI.

Sonardyne's AvTrak 6 combines the functions of transponder, transceiver and telemetry link in one low power unit, leaving more payload space and power for other instruments.

According to Sonardyne, it enables AUVs to undertake simultaneous LBL ranging, USBL tracking via a surface vessel and robust telemetry for AUV to vessel and AUV-to-AUV communications.

"Mini-Ranger 2 is ideal for use from smaller vessels, where survey-grade positioning performance is required. It can simultaneously track 10 targets at very fast update rates, is quick to install and has a standard operating range of 995 m, extendable to 4000 m. Sonardyne’s Marine Robotics software pack unlocks valuable additional capability when used with a compatible subsea vehicle mounted instrument such as AvTrak 6. This includes secure data exchange and remote control of multiple AUVs deployed in swarm scenarios," Sonardyne said.