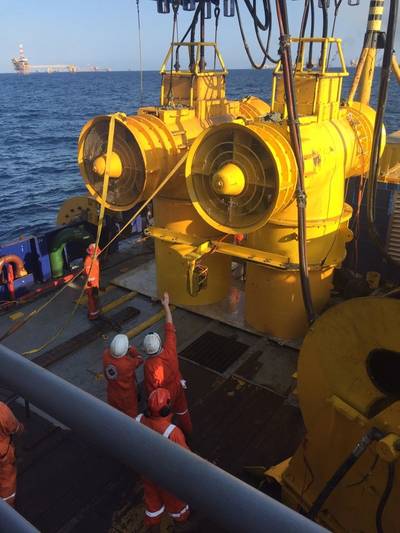 The Twin T8000 was developed to support SapuraKencana Mexicana’s trenching requirements. The offshore construction company needed more than 14km of a 36” pipeline with concrete coating to be trenched one meter on top of the pipe.

The tool was developed utilizing JFSE’s patented T8000 technology which has been responsible for the successful completion of hundreds of subsea excavation projects worldwide over the past 19 years. JFSE engineers created a solution which combined immense power with precision controllability by bringing two units together and developing the existing technology further.

The Twin T8000 has a total maximum output of 16,000 liters per second and had to achieve 0mm + 300mm accuracy of trench on this project. There were 15 crossings to negotiate.

The Twin T8000 equipment spread was mobilized on board the offshore supply vessel, Ocean Carrier, in the Gulf of Mexico as part of SapuraKencana Mexicana’s contract for the procurement and construction of a sour gas pipeline for Pemex covering five fields.

Graham Murdoch, technical director at JFSE, explained: “Although we designed the Twin T8000 with this particular project in mind, the technology will greatly benefit clients with large diameter trenching needs. The proven combination of power and controllability of this tool is second to none.

JFSE’s fleet of tools provides a non-contact form of excavation that eliminates the risks associated with other excavation methods especially around complex subsea assets. Further enhancing their capabilities, the tools have the additional benefit of real-time sonar imaging which enables precision excavation in confined areas, as well as for all cable or pipeline scopes from 1” through to more than 60” scopes. The tools are used for applications including pipeline and cable trenching, deburial, rock dump dispersal and seabed clearance and preparations. The M/CFE spreads are ideal for moving materials such as sand, silt and mud, drill cuttings, clay and rock dump.

JFSE’s fleet includes 30 M/CFEs and experts at the company, who are responsible for the successful completion of almost 450 projects over a period of 19 years, are currently developing two further excavators which will be launched to the market in 2017.

With strategic hubs in the UK, UAE, Singapore, Venezuela, USA, Brazil, South Africa, China and Mexico and tools based in five continents, it is the only M/CFE company capable of working on multiple projects simultaneously. As part of the James Fisher group, JFSE has access to bases and sister company expertise in more than 40 countries worldwide.

Sonardyne International Ltd. has increased the capabilities of its Fusion 2 software package to enable surveyors and construction…