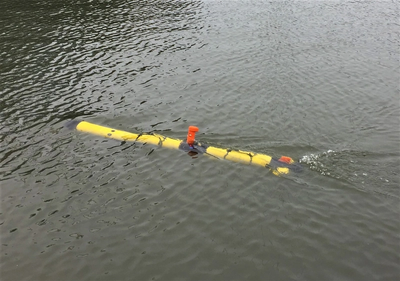 This innovative technology directly challenges traditional vessel-based, ROV and larger AUV survey techniques, delivering highly accurate survey data with significant reductions in project cost, time and risk.  The AUV has been robustly engineered, is capable of operations to 200m, and is one of the smallest and lightest on the market, allowing for single-user deployment from small work vessels or directly from shore.

Keith Wallace, Chief Commercial Officer of Blue Ocean Monitoring, stated: “The Iver3 AUV is a powerful addition to the expanding range of innovative technology we operate, and the services we can provide.  We have responded directly to our clients’ feedback by comprehensively assessing the latest available technology and procuring what we believe is a superior Light Class AUV for near-field infrastructure and benthic surveys.”

The Iver3 AUV is equipped with an EdgeTech 2205B sonar which combines side-scan sonar with an interferometric Phase Differencing Bathymetry System (PDBS) providing a significantly wider swath in shallow water compared to Multibeam Echo Sounders.  The EdgeTech 2205B sonar is also the only interferometric system on the market that produces bathymetry data with no nadir gap, furthering the efficacy of these systems for shallow water and low altitude coverage.

Simon Illingworth, Managing Director for Blue Ocean Monitoring, commented that “We have immediate requirements for subsea pipeline inspection surveys, shallow water bathymetry surveys and benthic habitat monitoring; however, there are many other applications we are currently exploring.  The AUV has open system architecture and a modular payload which allows us to be flexible, but it also gives us the opportunity to integrate and test emerging sensor technologies easily as they become available.”