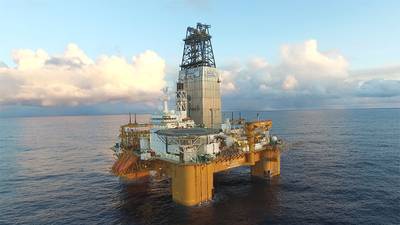 Aker BP recently awarded a contract worth up to $68 million to Odfjell Drilling for the lease of the semi-submersible drilling rig Deepsea Stavanger in the Norwegian Sea and the Barnts Sea (Photo: Aker BP)

Demand for offshore rig rental globally is starting to recover from its worst ever downturn, led by oil firms' growing demand for harsh-environment exploration and triggering multi-billion dollar tie-ups among drillers hoping to profit, executives said.
While the 2014-2016 oil price crash caused firms to cut exploration budgets, ending a boom in rig demand and bankrupting many owners, energy companies are now seeking to replenish their hydrocarbon reserves.
The nascent demand for harsh-environment rigs, particularly for North Sea drilling, could lead to increased rates for these units as soon as 2018, and other categories may follow in 2019 or 2020, companies and analysts say.
Transocean Chief Executive Jeremy Thighpen told UBS analysts he would not be surprised to see next fixtures for such rigs to rise to $300,000 from current levels of around $200,000.
Oslo-based Pareto Securities also said it expected day rates for modern harsh-environment rigs to rise to $250,000-$300,000 in contracts awarded in 2018, with other segments rising later.
Nordea bank said it saw the rig market in the North Sea tightening in 2018, particularly for high-end rigs, with Odfjell Drilling signing in August a nine-month contract with Aker BP at a day rate of $250,000.
Analysts mostly have "Buy" or "Strong Buy" ratings for Borr Drilling, Odfjell Drilling, Transocean and Northern Drilling, according to Thomson Reuters data, as they have the most exposure to harsh-environment rigs, the newest fleets and the lowest debts in the sector.
However, Simen Lieungh, chief executive of Odfjell Drilling, told Reuters he did not expect day rates rising significantly to $350,000-400,000 until late 2019.
Historically, the percentage of the global fleet that has being utilised had to rise to 85 percent or more for day rates to increase significantly. Today they are around 60-70 percent, depending on the rig segment.
"I think we can see utilisation moving into the 80s during the next 12 months," Borr's Chief Executive Simon Johnson told Reuters, referring to jack-up rigs, used in shallow waters.
Some, however, pointing to a large supply overhang in the jack-up market, with total supply counting more than 500 units, while current demand is around 300. Nordea says some 100-200 jack-up rigs may need to be scrapped before day rates improve.
M&A
Eying a market upturn, some executives are now busy seeking mergers and acquisitions.
London-based Ensco's shareholders will vote on Thursday on whether to approve the board's proposal to buy smaller rival Atwood Oceanics.
Some shareholders have questioned the timing and the value of the deal, but the management has defended it.
"We believe the offshore drilling sector is entering a recovery phase following an extended downturn ...," Ensco's Chief Executive Carl Trowell told investors on Sept. 22.
"... now is the time to make counter-cyclical investments in the highest-specification assets...," he added.
Other recent deals include Transocean buying Norway's Songa Offshore and Borr Drilling acquiring 15 jack-up rigs from Transocean in March.
Seadrill, controlled by Norwegian-born billionaire John Fredriksen, expects the recovery to help it to emerge from Chapter 11 proceedings next August.
"We have decided to restructure our finances so we can build a bridge to the upturn in the industry when fleet utilisation and day rates return to more normal levels," Seadrill said.
Danish conglomerate A.P. Moller-Maersk is seeking buyers for its unlisted Maersk Drilling unit, industry and investor sources said.
"After the worst downturn in history, we have entered the recovery phase," said Gunnar Eliassen, director at Northern Drilling, a new rig company set up with Fredriksen.