FPSO Operation Increased 84% in Past Decade 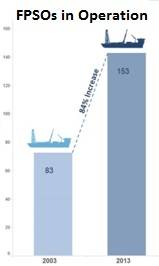 IMA/EMA recently completed an in-depth analysis of the floating production sector. Highlighted below are some key findings in Floating Production Systems: assessment of the outlook for FPSOs, Semis, TLPs, Spars, FLNGs, FSRUs and FSOs.

Inventory of floating production systems now at 269 units
FPSOs account for 61% of the existing systems. The balance is comprised of production semis, tension leg platforms, production spars, production barges and floating regasification/storage units. Thirteen units (twelveFPSOs and one Semi) are off field and available for reuse – resulting in an overall utilization rate of 95.2%. Another 93 floating storage/offloading units (without production capability) are in service.

Backlog of production floater orders remains at an all-time high
Current order backlog consists of 72 production floaters – 40 FPSOs, six production semis, five TLPs, four spars, one production barge, four FLNGs and 12 FSRUs. Almost half of floater fabrication work is taking place in Asia, principally conversion work in Singapore and China, with newbuilding work principally in Korea. Since March 2013, contracts for 10 production units totaling more than $11 billion have been placed, including the most expensive FPSO ever ordered at $3 billion. This continues the trend of increasingly higher prices, with the cost of a production floater now averaging close to $1 billion.

However, could recent deferrals indicate deeper troubles ahead?
Despite the spectacular growth in unit numbers and increasing order values, we see indications that deepwater investment may slow. According to Jim McCaul, head of IMA,“maybe it is more than a coincidence that five major deepwater projects have been deferred over the past several months. Each project had its own reason for deferral. But five in such a short period sends warning signals to everyone in this sector.”