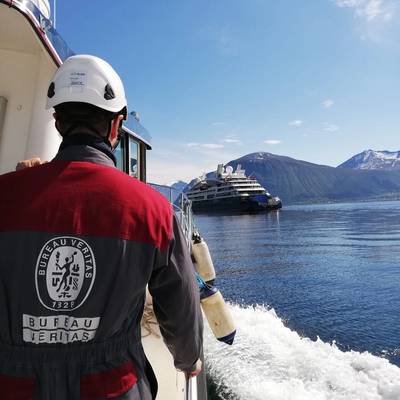 NR614 establishes requirements for the measurement of underwater radiated noise and the ‘acoustic sound signature’ emitted by self-propelled ships to support the management and mitigation of the impact of noise on marine fauna in both shallow and deep waters. Le Jacques-Cartier is one of the few cruise ships in the world to have obtained this certification, rewarding the cutting-edge design in terms of environmental conservation of the Ponant Explorers series.

The sound tests were carried out in September, off the coast of Morgat, located in the Gulf of Morbihan in Brittany. Using a measurement buoy in the form of a floating line with 3 hydrophones, Bureau Veritas experts with technical support from acoustic specialists Quiet Oceans analysed the sound radiation from Le Jacques-Cartier to assess the vessel's acoustic signature.

The URN notation, valid for 5 years at a maximum speed of 13 knots, is provided in addition to the Bureau Veritas Comfort 1 certification, guaranteeing passengers the lowest possible noise impact level, already issued to the entire PONANT fleet by Bureau Veritas.

In 2017 the company supported the ECHO program, an initiative taken by the Port of Vancouver. Ponant’s ships deliberately reduced their speed in an important feeding area for whales, to reduce underwater noise in this area. Subsequently, Ponant extended these measures deciding to limit the average speed of all its vessels to 10 knots, regardless of the navigation zone to mitigate the impact on underwater fauna.

These Tiny Oceanic Creatures Are Essential to Tackling Climate Change

The ocean withdraws about one third of the CO₂ in the atmosphere, mitigating climate change and making life possible on Earth.