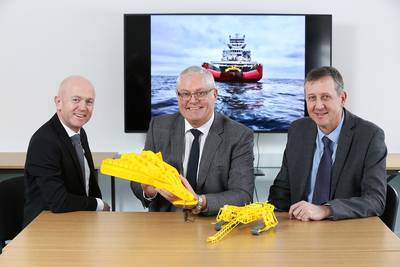 Ecosse Subsea Systems (ESS) has added  Andy Readyhough to the management team, charged with global business development for the ambitious Aberdeen-shire based company which specialises in seabed clearance and trenching operations in the renewable energy, oil and gas and interconnector sectors.
Readyhough has joined ESS having previously held senior management positions at Global Marine Systems and DeepOcean UK. He is a master mariner with more than 35 years maritime and offshore experience and for the last 18 years was engaged in submarine cable installation, trenching and maintenance operations.
ESS’s latest appointment follows Mark Brown joining as Engineering Manager and consolidates a management team which is focussed on international growth and rolling out patented technologies and a skills set which has proved highly successful in the UK and Baltic subsea markets.
Banchory-headquartered ESS has developed an impressive portfolio of patented subsea tools and is regarded as a leading innovator in seabed preparation, trenching and backfill. The company’s SCAR seabed systems – including the largest boulder clearing tool in the world - can be deployed on a variety of subsea tasks required on offshore windfarm projects and major infrastructure and interconnector projects.
• DeepOcean UK • oil and gas • renewable energy
Email

KVH Industries, Inc. and Kongsberg Digital completed the installation of their first joint maritime IoT system on an active…