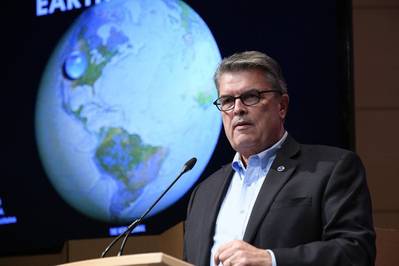 Craig McLean, NOAA assistant administrator for Research, speaks about the importance of the ocean to our weather, climate and planet's health at the 2018 Aspen Ideas Festival in Aspen, Colorado. NOAA

Craig N. McLean, assistant administrator of NOAA Research has announced his plan to retire from public service on April 1, 2022.

McLean began his NOAA career as a uniformed officer in the NOAA Corps four decades ago and rose to lead the agency’s research division and become a champion of ocean exploration, scientific integrity and science diplomacy, National Oceanic and Atmospheric Administration (NOAA) said.

"Craig has been a passionate leader aboard our ships and more recently a champion of NOAA research to advance our mission to serve the nation,” said Rick Spinrad, Ph.D., NOAA Administrator. “Like the best of ship captains, Craig has steered NOAA through rough waters, always upholding scientific integrity, advancing science and technology, forging strong partnerships at home and abroad.”

McLean joined NOAA as a member of NOAA’s commissioned corps in 1981, where he served for nearly 25 years aboard fisheries, oceanographic and hydrographic ships, retiring from the NOAA Corps at the rank of captain. He then went on to serve the last 16 years in NOAA senior leadership positions. He has served as the NOAA assistant administrator for Oceanic and Atmospheric Research (NOAA Research) for nearly seven years, as well as NOAA’s acting Chief Scientist for most of the past five years.

As leader of NOAA Research, McLean has raised the public profile of NOAA’s ocean, weather, climate and Great Lakes research. He has strengthened collaboration with NOAA’s National Weather Service and across NOAA, and quickened the pace of using new research to improve  NOAA’s forecasts and other products that serve the public, NOAA said of McLean.

"I have been proud to wear the NOAA jersey for 40 years and work with so many amazing people who perform tirelessly to understand and protect our planet, ” said McLean. “What I learned from my experiences early in my career is that leadership has the responsibility to do everything you can for your people, advocate for your people, and when you have chosen the right people, the mission will flow."

NOAA also pointed out that McLean played a major role in September 2019 when he spoke out against a NOAA public statement criticizing NOAA weather forecasters who corrected  President Trump’s warning about Hurricane Dorian.

"An outside panel and internal government review found that NOAA had violated its scientific integrity policy in criticizing its forecasters for making what were scientifically accurate statements. NOAA subsequently welcomed the findings and has worked to further strengthen its scientific integrity policy. The NOAA policy is considered one of the strongest in the federal government and has served as one of the models for President Biden’s Memorandum on Restoring Trust in Government, which includes establishing a Task Force on Scientific Integrity to ensure all federal agencies make evidence-based decisions guided by the best available science and data, " NOAA said.

McLean was the founding director of NOAA Ocean Exploration program, the only U.S. federal agency program dedicated to exploring the deep ocean. During his tenure, he led the effort to create a dedicated U.S. ship for deep ocean exploration, the NOAA Ship Okeanos Explorer, which was commissioned in 2008.

He also took part in several exploration missions, including the recovery of the USS Monitor turret, and a return to the Titanic in 2004 with renowned explorer, Bob Ballard.

"Since he first helped create NOAA Ocean Exploration in 2001, McLean has been a leader in efforts to map all U.S. offshore waters to advance oceanographic knowledge and discover the ocean’s secrets, including new species, historical shipwrecks, and previously unknown undersea mountains. The U.S. has a goal to map U.S. deep ocean waters by 2030 and recently passed a significant milestone in October 2021 of two million square kilometers mapped, which is equivalent in size to a quarter of the contiguous United States," NOAA said.

McLean has served for 11 years as the U.S. representative to the Intergovernmental Oceanographic Commission of UNESCO where he has helped to lead the new UN Decade of Ocean Science, and as the U.S. representative for the U.S-European Union-Canada Galway Statement on Atlantic Ocean Cooperation. He has been awarded the Department of Commerce Silver and Bronze Medals, and the Support of Science Award from the Council of Scientific Society Presidents for his defense of scientific integrity. He is a Fellow of The Explorers Club,  the Marine Technology Society, and a past president and chairman of the Sea-Space Symposium.

McLean grew up on the Passaic River in Rutherford, New Jersey, received a bachelor of science degree in zoology from Rutgers University and later received a law degree from Quinnipiac College School of Law. He has practiced marine resource and other legal work for NOAA.