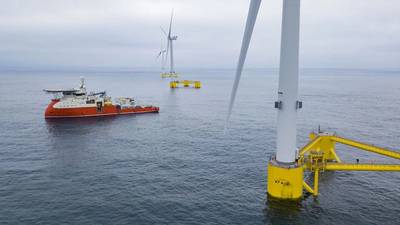 Subsea survey services and ROV provider Rovco has won a contract to carry out survey work on Erebus, a planned 96MW offshore floating wind farm 45 km off the coast of Pembrokeshire, in the southwest of Wales.

Rovco said Monday that Blue Gem Wind, the joint venture between Total and Simply Blue Energy had awarded it the survey contract worth one million pounds.

The survey, set to begin in August, will consist of a detailed geophysical and environmental site investigation to assess the seabed and sub-surface conditions at both the wind farm and along the potential cable routes to shore.

Hugh Kelly, Project Managing Director, said “We are delighted to have awarded this contract to a very capable UK company local to our project in the Celtic Sea. We want to ensure the local supply chain is involved as much as possible. It is also positive to see low carbon value creation is continuing during the difficulties of COVID19.”

Brian Allen, our CEO, added, “We are very excited to be working on the Consenting Survey and to help Blue Gem Wind inform the design of this Floating Offshore Wind Farm."

"We are aware of the exponential growth to be seen in the sector, and look to provide a top-end service, and be a key asset of the local supply chain for future site investigation survey projects across the UK from our Bristol and Edinburgh locations"

Rovco has cited a recent report by the Offshore Renewable Energy Catapult, according to which there could be as much as 50GW of electricity capacity available in the Celtic Sea, It has been estimated that the first GW of floating wind could potentially deliver over 3,000 jobs and £682m in supply chain opportunities for Wales and Cornwall by 2030.