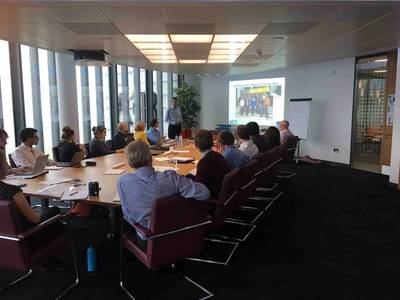 CCS is an emerging technology that involves capturing CO2 emissions, transporting it and securely storing it in undersea rock formations to prevent it from entering the atmosphere.
Project Acorn is a low cost CCS system in Northeast Scotland which could be operational by 2023. It will exploit redundant North Sea gas distribution assets.
The Acorn CCS Project has now begun a feasibility study after concluding funding from the European Union’s funding round Accelerating CCS Technologies (ACT). The ACT Acorn study is being led by Pale Blue Dot Energy with project partners Scottish Carbon Capture & Storage (University of Aberdeen, University of Edinburgh and Heriot-Watt University), University of Liverpool, Bellona (Norway) and Radboud University (The Netherlands).
The study will demonstrate the commercial and regulatory aspects of CCS project development in the U.K. This would include the commercial aspects of transferring oil and gas infrastructure for use in CCS, the implementation of CO2 storage permits and development of funding and risk allocation aspects of CCS projects.
Researchers will develop a full-chain business case and economic model as well as pinpoint the best North Sea geological CO2 storage site for the project. They will also recommend policy that could support a just transition to a decarbonizes future in regions dependent on fossil fuel industries and identify tools and methodologies for public engagement.
CCS has significant potential to generate economic value and create jobs through the delivery of future projects in the U.K. The recent report Clean Air-Clean Industry-Clean Growth; How Carbon capture will boost the U.K. economy concludes that CCS will bring £129 billion in societal and economic benefits to the U.K. The U.K. is well placed, with CCS supply chain skills, to address this emerging market.
Aage Stangeland, of Research Council of Norway, which co-ordinates the ACT fund, said, “The Acorn project looks very promising. The project has the potential to be the start of a CCS value chain in the North Sea. This could make a significant contribution to wide deployment of CCS in Europe.”
Steve Murphy, project director, of Pale Blue Dot Energy, said, “Acorn is an exciting step forward for CCS in the U.K., especially after several false starts in recent years. Acorn starts on a small scale, reusing existing oil and gas infrastructure. This is essentially a commissioning phase for a project that could see millions of tons of CO2 stored as Acorn expands to include emissions from Central Scotland, from future hydrogen produced at St Fergus and the potential import of CO2 to Peterhead Harbor. We want to encourage the replication of the Acorn project worldwide, and one of our key objectives is to engage with low-carbon stakeholders in Europe and further afield to disseminate lessons learned and tools created.”
• Bellona • Europe • European Union
Email